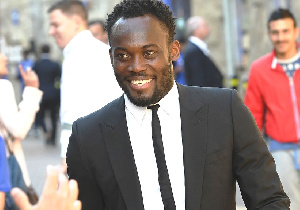 Former Black Stars midfielder, Michael Essien, has proved his critics wrong after releasing a photo of his family.

The football star came under severe attack after deciding to support the rights of the LGBTQ+ community in Ghana. Many Ghanaians insulted the former Chelsea star with some describing him as gay. He deleted the post almost immediately.

Now, the celebrated midfielder has replied his critics by proving that all the things said about him were false.

On Monday, March 8, 2021, which happened to be International Women’s Day, he took to social media to celebrate all women.

In celebrating the day, he released a photo to flaunt his three children. In the photo he was captured in the same attire as his kids.

From the photo, his kids’ faces were not shown as they were covered with love emojis. His caption of the photo read: “Happy International Women’s Day to all the mothers out there.”