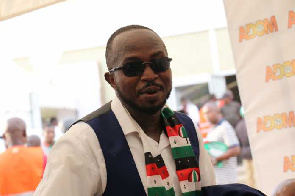 In a post sighted by MyNewsGh.com from Mr Stephen Atubiga, he said the name of John Dramani Mahama is a powerful name that can work miracles.

“I have been told how married couples or partners are desperately waiting for JDM’s leadership. The name JDM alone is curing depressions due to hardship in Ghana.

“The name JDM alone today in Ghana is a simulant or (Aphrodisiac ) for partners. Due to hardship and depression. Others are worshipping JDM like (god) to come and save Ghana. I will not be surprise to wake up one morning to see JDM healing water, JDM power water , JDM lotions / ointment from pastors. The whole country is in depression and setbacks . JDM is the right leader now for NDC. I endorsed JDM in the interest of mother Ghana. Vote JDM , Together JDM will be president again . love you all.Stephen Atubiga.”

Stephen Atubiga was contesting John Mahama and 6 others for the leadership of the NDC but backed out last minute to support Mr Mahama.

Stephen Atubiga in his letter of withdrawal to the National Executive Committee (NEC) of the NDC explained thus:

“Having submitted myself to counsel, prayers and direction, I wish to withdraw from the NDC race ahead of the 2020 general elections.”

“After a fathomless deliberation and consultation with wellwishers, and my team, I have decided to throw my weight behind His Excellency John Dramani Mahama.”

“I want to personally thank my brother Haruna Iddrisu for his wise counsel and brotherly advice. My gratitude to the party, of elders for their intervention and roles played regarding the upcoming elections of the great NDC.” He added.

“In a lengthy discussion with His Excellency John Mahama, I can conclude that his vision matches mine. He gave me an assurance of pulling the party along, building party offices throughout the constituencies, creating jobs, empowering the youth and ensuring capacity building for the youth.” He explained.

Since his withdrawal, Mr Atubiga has been canvassing for votes for Mr Mahama. MyNewsGh.com will keep our readers posted.