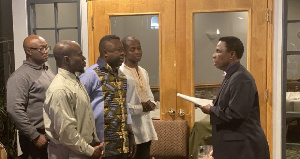 IL December 1, 2019: Members of the Ghana National Council of Metropolitan Chicago overwhelmingly endorsed and affirmed the incumbent President, Paa Kwasi Sam, by voting massively to retain him for three more years. Paa Kwasi Sam stood unopposed but had 12 affirmation votes, one no vote and one invalid vote. The current treasurer of the council, Jeff Badu, also retained his position when he was re-elected unopposed.

In an affirmation vote, he had all the 14 votes. Mr. Effa Ameyaw, popularly known as “kakape”, was also elected as sergeant-at-arms unopposed, with all 14 affirmation votes. Fourteen affiliate organizations constitute the GNC. Each organization has one vote. The elections were free and fair.

In a short acceptance remarks, the President-elect, Paa Kwasi Sam, thanked the council members for the honor and confidence reposed in him. He also promised to unite the community and continue with the good works that have seen the council for the first time in its history, immensely impacted members of the community as a result of the GNC’s health fare and back to school programs. Financially , the council has also had gains than all former administrations put together. As part of reforming the council, he promised a constitutional review committee to look into areas of the current constitution for possible amendments.

The President-elect also asked that members of the council be taken through an orientation program so that they can be familiar with the dos and don’ts as a council member. In conclusion, he explained that this is necessary since most members join the council without foreknowledge of the constitution of the GNC and the roles they are supposed to play.

The Vice-President, Kassim Abubakari, advised the council members When he said “as immigrants who are far away from home, we should be each other’s keeper”.” Let us show love not hatred to each other; ninety-nine percent of the negatives about the council out there is untrue,” he strongly refuted. He ended by advising that “problems are not resolved in public, that is , on radio, television, etc.”. Reverend Dr. Kofi Noonoo swore the newly elected officials into office.

In an interesting development prior to the elections, the President of the chieftaincy council, Alhajie Issa Samori, came to the meeting and announced that he was the spokesperson for Mariam Issakka and threatened that if Mariam is not allowed to participate in the meeting, the meeting must be canceled. Members of the council, however, voted massively to continue with the meeting without Mariam. This happened after personnel of the hotel had asked Mariam to leave because of an alleged previous incidence at the cafeteria which led to Mariam Issakka and the GNC Business Manager, Eunice Cromwell, both temporarily banned from attending events at the hotel cafeteria. After the GNC president announced the ban, Eunice did not show up at the meeting. Mariam Issakka, however, showed up and had to leave the premises after the Chicago Police intervened.

Another spectacle at the meeting was about a so-called one thousand six hundred dollars ($1600.00) payment made for security services by the council. The alleged payment has dominated the air waves recently. The expenditure was explained by the treasurer, Jeff Badu, to be Ghanafest 2018 payment made for security services! The check he explained was cashed in January 2019 .

Earlier , the expenditure was erroneously alleged by others misreading the financial statement presented to be payments made for Ghana Independence security. Another remarkable occurrence was when a member of the electoral committee, Madam Korkor, denied that the council had voted for elections to be held in December 2019.

In a stunning response, Akua Agyeman told the gathering that Korkor was wasting everyone’s time and asked Korkor, why she did not raise those concerns during the corrections of the minutes?

A council member also threatened to sue www.sankofaonline.com for recording proceedings at the meeting. The complainant was however noted to be recording members at the same meeting a few minutes earlier. The recordings by sankofaonline.com are to clarify serious allegations against members of the council which are out in the community. Also, the meeting is public and the recordings we feel does not infringe on any individual privacy. These are some of the problems council members must deal with, bliss ignorance! Voting proceeded peacefully after that.

We advise the council to seek the assistance of an attorney to explain privacy laws to members as part of the proposed orientation program the President-elect has proposed. In our opinion, some of the problems at the council are the result of ignorance or intentionally generating problems to taint others and get them off their positions. At times issues raised by some members are legitimate but they appear to be mostly procedures which are not in place.

It would help tremendously if all sides come together to put in place measures to prevent re-occurrence, else this unnecessary bitterness at each other will unfortunately continue. We were enamored by the cordial and friendly nature members transacted business on the floor after the initial almost chaotic start. If that show of togetherness and maturity are signs of change, then the community’s clamor for a peaceful and united council have started unfurling. We urge all council members to strive and work together for the benefit of themselves and the larger Ghanaian community.