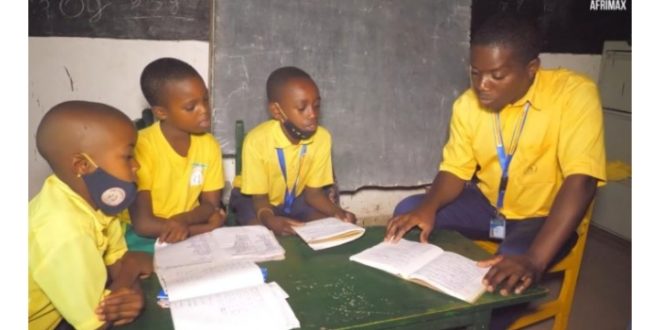 Share
A 38-year-old man’s ambitions of being a refined gentleman has got him studying in the same class with his three children.

Jean Pierre from Rwanda said he is not ashamed to be a primary three pupil, studying in a government school just like his children.

Disclosing what inspired him, Jean told Afrimax TV that his aim is to pay revenge on his wife, who left him for rich, educated men.

According to him, his marriage of many years hit rock bottom over his poor state, and his wife moved on so quickly with a successful young man who isn’t even his age

Pained by the betrayal, Jean enrolled himself in a school situated few walks from his home, and agreed to be admitted in any class that befits his educational status.

“I felt like a loser. I felt like my life was over and another man was snatching what I had built from scratch so I started learning. I saw how my children were making improvement in school and that inspired me to follow them to school,” he said.

That was how he was sent to class three, an early learning stage since he can neither read, write nor speak English.

Despite many residents discouraging him on what they say is embarrassing, Jean goes to school with his head high and even mingles with his classmates.

According to him, he would not let history repeat itself, like some decades ago when he was forced to drop out.

He recounted how he had to ditch his studies for menial jobs like being a head potter or a servant just to make ends meet.

This time around, he is ready to graduate, at an old age of 50 per his estimate.

He is the oldest in the school; older than all the teaching staff and even principal.

The principal of the school told media men that despite the age difference, Jean gives him maximum respect, adding he obeys the rules and doesn’t ask for extra or preferential treatment.

He further stated that Jean takes his ambition of being a Minister of State or school principal seriously.

Having studied for the past two years and five months, Jean has made progress in reading and writing, though not perfect.