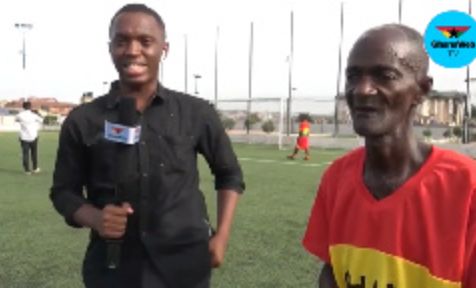 At age 68, most footballers would be looking back at their journey in life after hanging their boots many years back.

Same can however not be said about Papa Poloo, who plays in the Ghanaian third-tier league. Born in 1954, Polo was three years old when Ghana had independence in 1957.

Poloo plays for Kwahu Fodua FC, a third-tier side based in the Eastern region, Ghana. He is a midfielder with eye witnesses claiming he could play full throttle of a game without showing any signs of tiredness.

Football is his part-time job, on a regular basis, he works as a pump attendant at a fuel station on the Kumasi to Accra road.

Papa Poloo does not play in a professional league, however, he is the oldest active footballer in Ghana.

Speaking to GhanaWeb, he revealed his secret to his fitness and his dream of getting back in the game for any of the Ghana Premier League clubs.