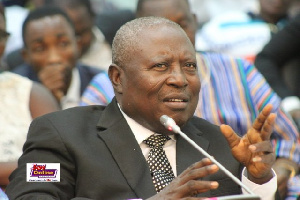 MyNewsGh.com has confirmed that two of three police investigators who were assigned to the office of the Special Prosecutor barely two months ago have been fired.

The Special Prosecutor, Martin Alamisi Burnes Kaiser Amidu recommended the removal of the two from his office in a petition he is reported to have sent to the Inspector General of Police, David Asante Apeatu.

It would be recalled that in February this year, two investigators in a communique reference number TB/HQRS.1/VOL 16/99 this portal sighted, assigned two officers to the citizen vigilante.

Late last week, he raised concerns over the conduct of Detective Inspector Yaa Boakyewaa he accused leaking confidential information and documents to unauthorized persons which defeats the purpose of the Special Prosecutor’s office.

Mr. Amidu therefore directed Inspector General of Police to remove her from the Special Prosecutor’s office for exhibiting gross insubordination and impudence in his presence when she was marched to his office to sign a letter of receipt of her suspension letter.

“She continued rudely and very insubordinately and had the impudence to tell me in the presence of the Deputy Special Prosecutor, the Secretary to the Office, the acting Head of the Investigations Division, and a senior officer of the Bureau of National Investigations (BNI) that I had no right to address her as a Sergeant when she had been promoted to an Inspector.” He disclosed.

In the case of the second investigator, MyNewsGh.com gathered that Mr. Amidu claimed he was not satisfied with his level of work and demanded he should also be removed which has since been complied leaving behind only one investigator.