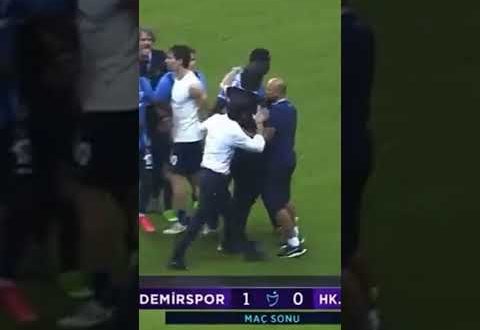 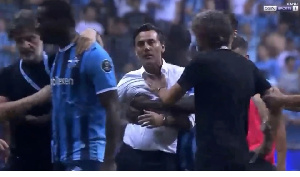 Italian player of Ghanaian descent, Mario Balotelli was caught up in war of words and nearly fought with his coach after Adana Demirspor’s clash with Umraniye on Saturday, August 27, 2022.

The 32-year-old came on as a substitute for Artem Dzyuba after halftime in the Turkish Super Lig.

Despite Adana Demirspor’s 1-0 win, Balotelli’s performance did not match the expectation of his manager Vincenzo Montella.

When Vincenzo Montella confronted the striker, he got furious and exchanged words with the coach on the pitch.

Balotelli and his coach nearly exchanged fisticuffs before they were restrained by some players and officials.

Coach Vincenzo Montella continued fuming into the tunnel even after they were separated on the pitch.

Speaking after the game coach Vincenzo Montella was tight-lipped and refused to go into any detail on the matter.

He told BeIN Sports: “I don’t need to say anything about Balotelli. He fell short of my expectations and there are tensions like that at the end of the game. We have higher expectations for him. That’s why I conveyed this to him.

“Of course, the adrenaline sometimes makes you say other things. But for me, it ended there, so this event,” the coach of Adana Demirspor said.

This is not the first time Balotelli has gotten into trouble since arriving in the Turkish league.

He recently got into an altercation with one of his Demirspor teammates after being substituted midway through a match in August 2021.

The former Man City and Inter player punched his teammate in fury.