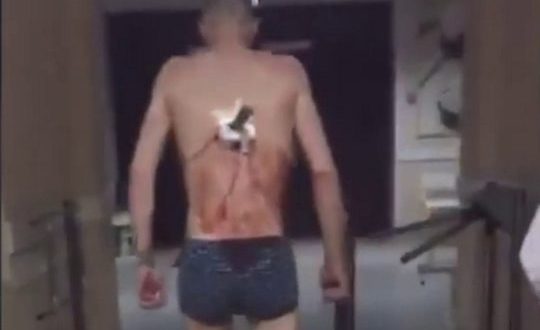 This hospital patient must have had a serious craving for a cigarette. He tried to walk out of hospital to go and spark up despite there being a knife embedded in his back.

But the man, identified only as Vladimir, 34, agreed to return to his bed at the hospital in Kazan, Russia, when he was told ‘you are about to die’.

A nurse filmed the man – dressed only in his underwear – as staff tried to reason with him, informing him that only the handle of the knife was visible. Another nurse can be heard asking ‘Vladimir, are you mad?’ while another asked ‘how far are you going?’ as he clutched onto a rail for support. He told them that he was going out for a cigarette but it was then pointed out that he didn’t have any.

Vladimir managed to leave the hospital where temperatures outside were -10°C and there was snow on the ground. A doctor reasoned with him saying: ‘Let’s go. Have an injection and you go home.’ He eventually agreed, the knife was removed and he is now in a stable condition. In hospital.