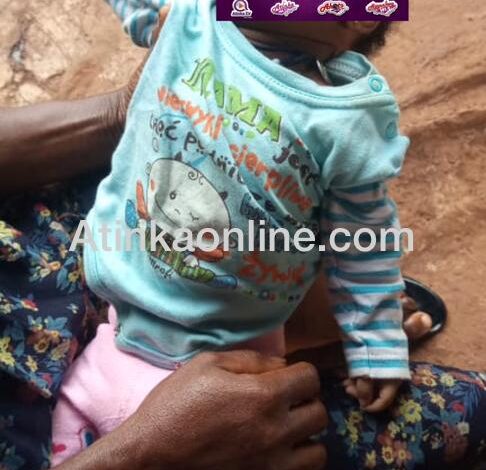 An unidentified man has been beaten to death by an angry mob at Dompease, a suburb of Berekum in the Bono Region for attempting to steal a 3 -month old baby.

According to reports, the “mystery man” sneaked into a couple’s room through the window on Wednesday and stole the baby. The couple, Obaa Anita and Husband Agya Kwabena were sleeping when the incident happened.

However, mother of the child, madam Anita was awakened by the shadow of the baby thief and subsequently raised an alarm.

Narrating the incident to Nimdie FM, a local radio station, an eyewitness, whose name was only given as “Aboloway,” said the youth of the area responded to Anita’s call and proceeded to the “crime scene” to deal with the suspect.

According to him, the suspect sensing danger, threw the helpless baby away and took to his heels. However, luck eluded him when the youth pounced on him.

Yaw Boateng, a Unit Committee member of the area, incurred the wrath of the agitated youth when he attempted to prevent them from delivering “instant justice”. He later ran for cover and informed the police about the issue.

Unfortunately, the police arrived at the scene only to meet the lifeless body of the suspect. The body was later conveyed to the Berekum Holy Family Hospital for autopsy.