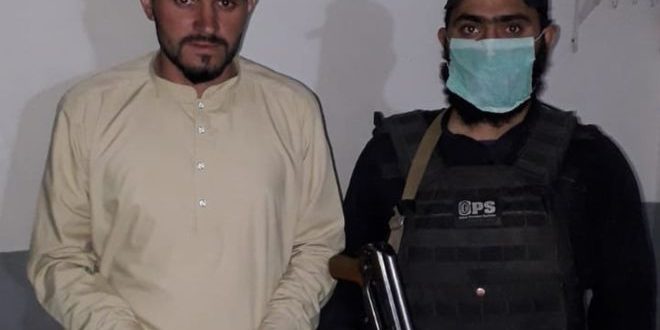 Police have arrested a man suspected of killing two young women in Pakistan, after a video in which a man is seen kissing them went viral on social media.

Muhammad Aslam is suspected of shooting the pair, aged 18 and 16, who were his cousins.

The man in the video, the owner of the phone it was filmed on, and relatives of the women are also in custody.

They were murdered last week in the village of Shamplan, in Garyom region on the border of North and South Waziristan tribal districts in Khyber Pakhtunkhwa province.

The area is a socially conservative remote region, where tribal law is often upheld over federal law.

Activists believe about 1,000 such so-called “honour killing” murders – for perceived transgressions of social codes – are carried out across the country every year.

The 52-second long video was reportedly shot nearly a year ago, but went viral a few weeks ago.

In the video, seen by the BBC, Umer Ayaz, 28, is seen in a secluded area outdoors with three veiled women, two of whom he then kisses. He has been arrested and charged with making the “vulgar” video clip.

He is believed to be married with two children.

The third girl, who is not kissed in the video, is the wife of the suspected killer according to police. She is believed to be in hiding.

Fida Wazir, whose phone was used to make the video, has also been arrested – suspected of spreading the video on social media.

The father of one victim and the brother of the other are also in police custody for failing to report the killings and concealing evidence.

The long road to justice

The tribal codes of the Waziristan region mean that the mixing of the sexes is unheard of. As such, the video came as a shock.

The region’s relatively new police force – only brought in two years ago, after Waziristan and the wider tribal region were brought into the mainstream rule of law instead of managing their own affairs – decided it had to act.

Since so-called “honour killings” are treated as an internal family matter and no complaints are lodged with the police, North Waziristan’s officers acted on their own initiative to lodge a complaint when reports of the killings surfaced.

Officers initially booked the suspects for murder, but have since added clauses related to causing mischief, hiding evidence and electronic crime. The mischief clause prevents the heirs of a murdered individual from pardoning the killer, which is otherwise allowed under Pakistan’s Islamic laws promulgated in 1980s.

But they are still some way from making a fool-proof case against the suspect. An immediate challenge would be to find the dead bodies and conduct autopsies on them.

Investigators believe the bodies were whisked away by the family to the neighbouring South Waziristan region, where they were buried. They say they are coordinating with the police in South Waziristan to discover the graves.

They will require a judicial magistrate’s permission to exhume the bodies.

What is a so-called ‘honour killing’?

It is the killing of a member of a family who is perceived to have brought dishonour upon relatives.

Pressure group Human Rights Watch says the most common reasons are that the victim:

But killings can be carried out for more trivial reasons, like dressing in a way deemed inappropriate or displaying behaviour seen as disobedient.