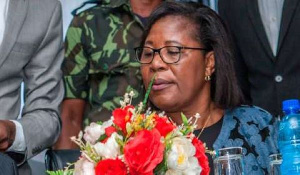 The head of Malawi’s electoral commission has resigned a month before a presidential election re-run.

The vote was ordered by the Constitutional Court which overturned last year’s poll giving a second term to President Peter Mutharika.

Protesters had demanded that Jane Ansah stand down over irregularities in the original election, including the use of correction fluid on ballot papers.

But in an interview on state television she denied she was giving in to pressure.

The re-run will take place on 23 June.