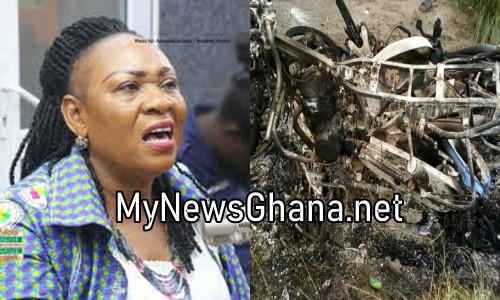 The Central Region branch of the National Peace Council has urged the Ghana Police Service and its Criminal Investigations Department (CID) as well as the Ministry of Interior to come out with the report on the case concerning the Member of Parliament for Awutu Senya East, Mavis Hawa Koomson.

Madam Hawa Koomson, who is also the Minister of Special Development Initiatives, admitted to firing gunshots during the voter registration exercise in July.

She was invited by the Central Regional Police CID to Cape Coast and a statement taken. The weapon she used at the Steps to Christ Registration Centre at Kasoa was also retrieved.

But the case was later transferred to the CID headquarters in Accra.

Speaking in an interview with Onua FM’s Kwame Kakraba, the regional chairman of the National Peace Council, Matthew Eghan, explained that since the MP’s case was transferred to the headquarters of the CID in Accra, no statement has come out from the police.

“We can never have peace if there’s no justice, justice will always go with peace so if we want peace in Ghana, and in the Central Region, we [will] appeal to the government and police to investigate what happened at Kasoa and also the Ajumako-Besease, where a minister of state was in the center of the issue, to come out,” he stated.

According to Mr Eghan, since the 2020 election is around the corner, the police can calm nerves by telling the public what has happened in investigations so far.

He made the call at a workshop organised at Assin Fosu in the Central Region by the Council to increase the campaign on the eradication of political vigilantism from Ghana.

The workshop was funded by the Danish Embassy and brought together stakeholders including political parties, security agencies, officials of the Electoral Commission and chiefs.