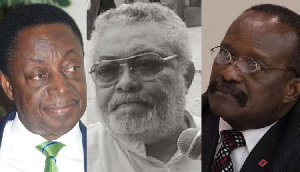 Former Bank of Ghana Governor and Finance Minister Dr Kwabena Duffour has reportedly run to the founder of the opposition National Democratic Congress, Jerry John Rawlings as a last resort to force John Mahama’s hand to pick him as a running mate, MyNewsGH.com can report.

This is after Rawlings made it abundantly clear he will fight hard against any attempt to make Kwesi Ahwoi the running mate.

The home of the Rawlingses has become the new ‘Mecca’ for NDC running mate aspirants as hopes are high the voice of Jerry Rawlings will weigh heavily in who becomes Mahama’s running mate.

A source disclosed to MyNewsGH.com Kwabena Duffour met the former president to lobby for him to be considered and possibly pushed by Mr Rawlings as his candidate.

Mr Duffour has lost almost everything as his bank and other assets have been liquidated which he hopes to fight and win back later. His last hope for new relevance is in clinching the NDC number two spot going into the 2020 poll.

Some senior NDC members led by Totobi Quakye are also believed to be behind Dr Kwesi Botchwey. They floated his name around months ago to test the public reception, which wasn’t what they expected

Mr Mahama is expected to announce his running mate choice early next year.

So far Rawlings has been tight-lipped about who his choice will be. He has been receiving the running mate hopefuls one after the other in meetings where his blessings are sought. The only time he spoke about the issue was to reject Kwesi Ahwoi. The former Agric Minister Kwesi Ahwoi incurred Rawlings wrath through his brothers.

Rawlings vowed to ensure Kwesi Ahwoi doesn’t become Mahama’s running mate due to his bad blood with the Ahwois. Should Mahama decide to pick the younger Ahwoi, it will be in direct defiance of Rawlings.

Readers of MyNewsGH.com will recall in October 2018 the former President Jerry John Rawlings launched a blistering campaign against an alleged plan by the Ahwoi brothers- Ato, Kwamena and Kwesi- to make their younger brother running mate to John Mahama.

The Former President Rawlings made a highly suggestive statement in a tweet in October 2018 in reaction to the decision by former President John Dramani Mahama to possibly appoint Kwesi Ahwoi as running mate ahead of the 2020 poll.

According to Rawlings, Kwesi Ahwoi has been dyeing his hair to look younger as a running mate choice.

“Isn’t the Presidency too busy a place for hopefuls/running mates who spend a little too much time grooming their moustache and dyeing their hair?” Rawlings tweeted.