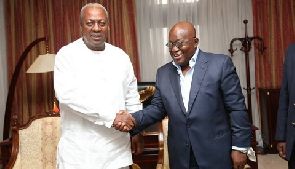 Former President John Dramani Mahama has ended his flagbearership campaign tour of all 275 constituencies in the country with a call on President Nana Akufo-Addo to “disband his state-sponsored vigilante groups.”

Addressing his final meeting with delegates of the National Democratic Congress (NDC) at Drobo in the Jaman South constituency in the Brong Ahafo Region, Mr. Mahama said Nana Akufo-Addo owes a duty as president to disband “his state-sponsored vigilante groups.”

He said despite all political parties having machomen for the purposes of providing intra-party security, Nana Akufo-Addo is responsible for the introduction of vigilante groups in the country, adding that the New Patriotic Party (NPP), with the president then as opposition leader, brought foreigners into the country to train NPP thugs.

The former president said the government is putting resources of the state at the disposal of its vigilante groups and other political parties are beginning to formulate a response.

Mr. Mahama, however, pointed out that the NDC is committed to peaceful elections and would therefore not do anything to threaten nor breach the security of the state.

He said the NDC has confidence in the state security agencies to provide security at its upcoming presidential primaries on Saturday, 23 February 2019 and will therefore not deploy any organized party security group for that purpose.