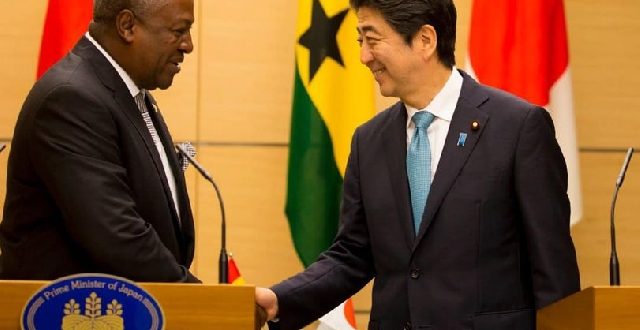 In a Facebook post on Friday, 8 July 2022, Mr Mahama said:  “His legacy will be remembered fondly by Ghana, Africa and the world at large for a long time to come.”

The former President continued that: “As President of Ghana, through my side meetings with him at international conferences and two official visits to Japan, I found him to be a leader passionate about opening up Japan’s role on the world stage, inclusive of expanding Japan-Africa relations.”

“I recall our last meeting in May of 2016, which led to the official publication of the restoration of the Yen loan portfolio to Ghana and the announcement of Japan’s commitment to assist Ghana with a number of important new and ongoing projects. These included the Tema motorway interchange project, expansion of the Sekondi fishing harbour, expansion and upgrade of the Noguchi Memorial Institute for Medical Research into an Advanced Research Centre for Infectious diseases, and the construction of a new bridge over the Southern Volta river at Volivo, among others,” the former President stated.

Mr Mahama also expressed his condolences to the family of the deceased former PM and the people of Japan.

The former Japanese PM was pronounced dead on Friday, 8 July 2022.

He was shot while delivering a speech at an election campaign event in the city of Nara.

“Shinzo Abe was transported to [the hospital] at 12:20 pm. He was in a state of cardiac arrest upon arrival. Resuscitation was administered. However, unfortunately, he died at 5:03 pm,” Hidetada Fukushima, professor of emergency medicine at Nara Medical University Hospital, told reporters on Friday.

Previous You gave away ₡47.9bn to corruption in your 1st term and now chasing IMF for ₡16bn – OG to gov’t
Next Some Basic schools shut down due to teachers strike