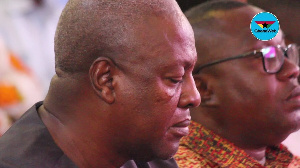 According to him, he would win convincingly only if the elections were conducted in a free and fair manner.

He has therefore, admonished the Electoral Commission (EC) to ensure that the will of Ghanaians in the 2020 elections was respected and upheld.

Addressing separate durbars at Agona Swedru, Gomoa-Obuasi and Dawurampong as part of his four-day tour of the Central Region, former Mr Mahama called on party faithful to be vigilant on election day.

“We are determined and the EC, or any institution should not try to subvert the will of the Ghanaian people. We have drawn the Commission’s attention to the many instances of infractions and actions that have not satisfied us,” he stated.

“While we are expecting that the EC will live above reproach, I want to assure you all, that the NDC is well-prepared, and we will police the ballots from all polling stations through the constituencies to the regional and finally to the national coalition Centre,” Mr Mahama added.

Taking a swipe at the NPP, he said Ghanaians were disappointed and peeved with the huge unfulfilled promises, economic mismanagement, unemployment and directionless nature of government to steer the affairs of the nation to prosperity.

He said the NPP government had derailed the pace of socio-economic development bestowed to them and lost credibility in managing the economy.

Mr Mahama cited the rising public debt and implementation of the free Senior High School (SHS), which was fraught with funding challenges to buttress his claims and rallied the support of the electorate to vote for the NDC to return the country onto the path of growth and prosperity.

“The NPP has failed to fulfil the promises it made to Ghanaians that won them power in the 2016 general election”, he indicated, adding that it had been four years of abandoned projects and failed promises of the NPP administration.