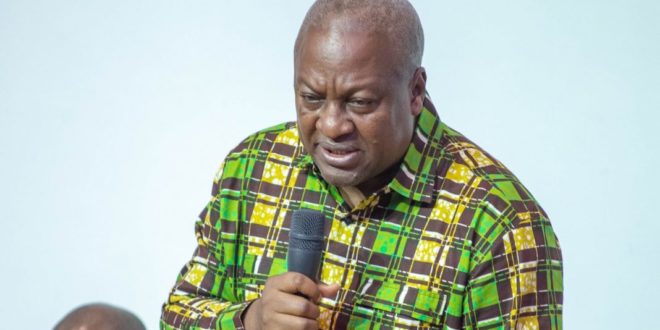 Mahama calls on stakeholders to take bold stance on Coronavirus

Former President and Flagbearer for the NDC, John Mahama has called on stakeholders, Governments and the United Nations System to take a bold stance on the deadly coronavirus.

John Mahama in a post on Facebook said “The Coronavirus disease (COVID-19) is posing a serious threat to global security, economy, trade, and transport. While the WHO has not yet declared it a pandemic, they urge countries to take aggressive containment measures.”

According to him, response to the deadly coronavirus has not been the best since the outbreak from its original source in Wuhan, China.

He noted that we are yet to see the kind of leadership, definite and concerted actions, which were mounted against the Ebola virus disease infection in West Africa a few years ago.

The Coronavirus disease (COVID-19) is posing a serious threat to global security, economy, trade, and transport. While the WHO has not yet declared it a pandemic, they urge countries to take aggressive containment measures.

Unfortunately, the international response had been lukewarm from the time of the outbreak from its original source in Wuhan, China.

In the late 20th and early 21st century, we appear to be experiencing an emergence of many new infectious diseases- Zika, Ebola, MERS, SARS among others. This is scary. But it is consistent with the changing nature of infectious diseases as a result of increasing population, poverty, migration, conflicts, economic and technological development, antimicrobial resistance, climate change, inadequate health infrastructure and public health policies.

These multiple contributory factors are daunting but not insurmountable if the global community, which has become intricately linked due to globalisation will act decisively together.

Unfortunately, we are yet to see the kind of leadership, definite and concerted actions, which were mounted against the Ebola virus disease infection in West Africa a few years ago.

As I said at the United Nations General Assembly in 2014, during the Ebola crisis, that “Ebola is a problem that belongs to the world because it is a disease that knows no boundaries”, we have similarly seen a rapid transnational spread of Coronavirus disease over the past few months.

Africa is vulnerable and has not been spared. The first case reported in West Africa has been in Nigeria. This must be a period for the implementation of aggressive preventive measures while we stamp out specific incidences.

We must mount a strong educational and awareness campaign on the nature and mode of transmission of COVID-19 as was done in the period of the Ebola disease outbreak. Discouraging handshaking, frequent handwashing, use of alcohol-based hand sanitisers at public gatherings such as churches, mosques, funerals etc. should be promoted as soon as possible. Measures such as the establishment of quarantine centres, provision of hazmat suits, temperature monitoring and traveller tracking are urgently required.

I, passionately, call on all stakeholders- Governments, the United Nations System, Health Professionals, Academia, Multinational Corporations, International and Local NGOs and CSOs – to immediately take a united, bold and definite stance against this Coronavirus disease, raise and pool resources in order to halt the spread of the deadly disease and end it.

While we take bold action to prevent the spread of this COVID-19 disease, we must also offer intercessory prayers to the almighty to grant as a Passover.