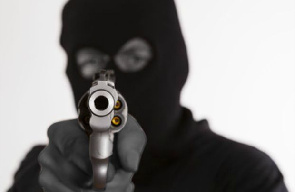 Luck eluded two robbers at Tema Community 9 cemetery area in Accra as one has been arrested with the other shot dead.

The two robbers according to a police report at about 5:30 am robbed a lady identified as Asantewaa Boakye-Yiadom at knife-point of her handbag containing cash of 280 cedis and $70.00 among other personal items by suspects Joshua Kwasi and Masawud Ahmed.

The two were on an unregistered royal motorbike. They tried escaping after the incident but they run out of luck as they were given a chase by a taxi driver upon shouts of robbers by residents of the area.

A police officer, corporal Emmanuel Asante who was on duty at the Golden Dragon Casino amidst shouts of robbers accosted the suspects on the motorcycle and they pulled to a stop.

One of the suspect Joshua Kwasi drew a knife to stab the corporal but was shot by the officer in self-defence. His partner Masawud Ahmed was arrested with the help of residents in the neighbourhood.

The Police found two lady handbags as well as exhibits of a knife and a screwdriver which have been taken for investigation.

In a related development, a lady identified as Mary Serwonu who had reported earlier that she had been robbed the same day at 5: am identified Masawud Ahmed as one of the two who robbed her.

The body of the deceased suspect has been deposited at the Police hospital mortuary.