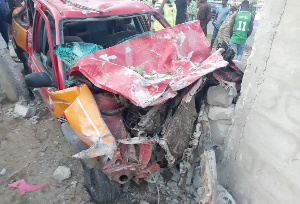 The joy of winning a lottery has led to the unfortunate death of some 5 persons.

The tragic incident which happened at Tegbi Vakpomda in the Anlo District of the Volta Region has thrown the affected family and the entire community into a state of mourning.

A 30-year-old unemployed man, known as Wisdom Kpodo zoomed into massive jubilation after winning an amount of GH¢1,200 from a lottery after several failed attempts in previous years.

To celebrate, he jumped into a taxi, with registration number GT-4482-U, at about 4:00pm with two of his friends.

Driving at top speed and recklessly, Wisdom lost control of the steering and veered into a house some 40 metres away from the road, killing all 5 occupants of the house.

Assembly Member for Tegbi Afedome Electoral Area, Noel Kokoroko, who witnessed the incident and narrated it to graphic.com.gh said Wisdom moved from Woe near Tegbi to Keta with the two, shouting ‘no size, no size’.

While returning to Woe, he attempted to overtake three vehicles in a row at Vakpomda and in the process caused the accident.

3 of the victims, Madam Regina Edzia and her two children died instantly while the remaining two were pronounced dead on arrival at the Keta Government Hospital.

The Keta Municipal Police, which confirmed the story, said the suspect was in police custody while investigations were underway into the incident.