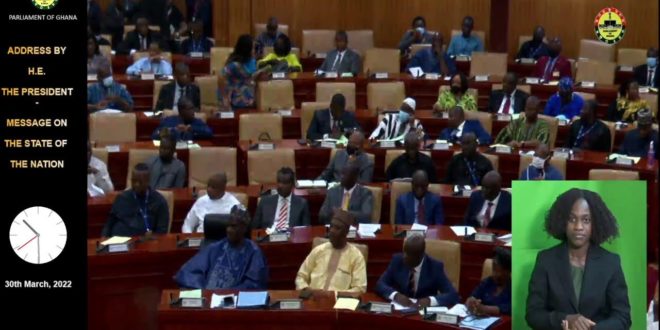 President Nana Dankwa Addo Akufo-Addo, in accordance with Article 67 of the 1992 Constitution of Ghana, will deliver the State of the Nation Address (SONA) in Parliament.

President Akufo-Addo was originally supposed to deliver SONA on March 3, 2022, however, the Business Committee in Parliament postponed the presentation which was later slated for Wednesday, March 30, 2022.

Akufo-Addo is expected to outline the government’s policy measures that will help the country get out of the current economic challenges. The president is also expected to state the country’s strategy to deal with the consequences of the Russia-Ukraine war.

The address will also cover development in all sectors of national development including security, economy agriculture, environment, education and health.

Watch the president address the Nation in Parliament below:

Previous ‘Some members may quit the business’ – MoMo Agents Assoc. warns over e-levy passage
Next How South Africans reacted to Ghana’s qualification to 2022 World Cup