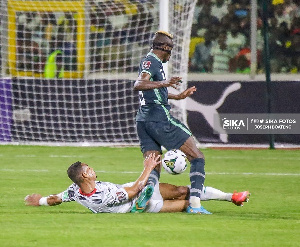 Welcome to GhanaWeb’s live streaming of the second leg of the FIFA World Cup play-off between Nigeria and Ghana.

The game is the last phase of the final qualifying round for the 2022 FIFA World Cup that will be hosted in Qatar.

In the first leg, nothing separated the two sides as the game today decides who among the two sides will qualify for the tournament.

The Black Stars will have plenty to play for against the Super Eagles at the Moshood Abiola National Stadium in Abuja as they aim at returning to the world stage with a win or a score draw.

The Super Eagles following the draw will need a win in order to qualify for their fourth consecutive appearance at the World Cup, which will be their 7th in total.

The crucial game could see a huge attendance following CAF’s approval to allow the Abiola Stadium to host fans to its capacity.