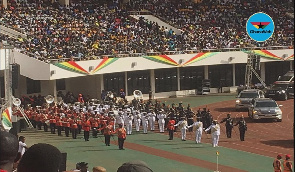 Over twenty thousand people, mostly residents from the various Northern regional districts have converged at the Aliu Mahama stadium in Tamale for the 62nd Independence Day Celebrations.

In his State of the Nation Address, President Akufo-Addo announced that as part of efforts to strengthen the recently renewed peace in the Northern regions, the 6th March celebrations which for the last 61 years had been held in the capital would be hosted by the Tamale.

This year’s event themed; “Celebrating Peace and Unity” has President Akufo-Addo, Ministers of State, Former Presidents including John Dramani Mahama, Flt. Lt. Jerry John Rawlings and the Overlord of Dagbon, Ya Naa Abukari Mahama II and other chiefs of Dagbon in attendance.

Special guest of honour will be the President of the Republic of Niger, H.E. Mahamadou Issoufou.

Join www.ghanaweb.com as we bring you the live updates from the Aliu Mahama stadium in Tamale