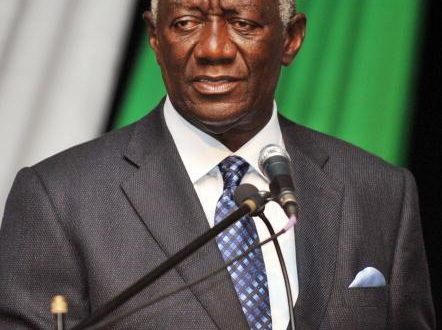 Former Ghanaian president John Kufuor speaks on February 5, 2010 in Abidjan during a conference a the Cultural Centre on the theme 'Elections in Africa: the example of Ghana'. Investigators have found evidence of "fraud" in a voters' list being compiled for Ivory Coast's long delayed polls, a judicial source said today, as the opposition called for the election to be held in a month. AFP PHOTO/ SIA KAMBOU (Photo credit should read SIA KAMBOU/AFP/Getty Images)

Former President John Agyekum Kufuor has called for the licensing of journalists to help curtail the disrespect for the profession.

According to Mr Kufuor, the media has, in the past, produced fine practitioners, hence the need to protect the sanctity of the profession.

He added that during his term as president, his government was not only committed to strengthening the media landscape but also deepening democracy to enable the media to contribute immensely to the shaping of government policies.

The former Ghanaian leader made the comments at the launch of the 70th Anniversary of the Ghana Journalists Association (GJA) in Accra on Tuesday, 28 May 2019.

Mr Kufuor observed that Ghana’s darkest day had been when the media was muzzled, hence, commended President Nana Addo Dankwa Akufo-Addo for giving his assent to the Right to Information Bill.

Mr Kufuor further charged the leadership of the GJA to ensure that its members are monitored frequently and protected from assault.

Mr Kufuor bemoaned the murder of investigative journalist Ahmed Hussein-Suale who worked with Tiger Eye PI until his death, describing the murder as “regrettable.”

The former President also entreated journalists to be magnanimous enough to retract and apologise to people they publish wrong reports about in their line of duty.

He noted that: “To err is man and to forgive divine”, hence, it will be disastrous on the part of any journalist to refuse to retract and apologise for a wrong reportage.

The leadership of the GJA conferred a Champion of Champions in Democracy title on Mr Kufuor.