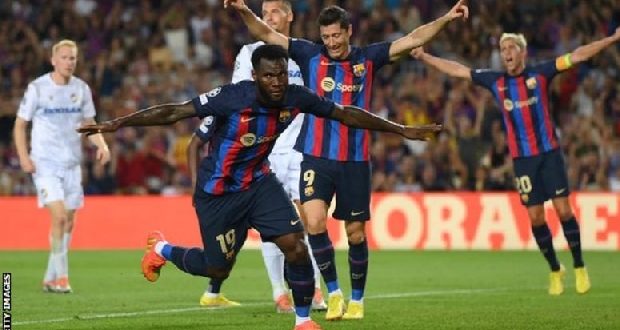 The 34-year-old Poland forward demonstrated his value by making it eight goals in five games since leaving Bayern in July.

Lewandowski, who helped Bayern win the competition in 2019-20, marked his first Champions League appearance for Barca with a clinical finish which doubled the lead after Franck Kessie had headed the hosts ahead.

He then made it 3-1 on the stroke of half-time with a header after Ousmane Dembele did well to win back possession before producing a fine cross.

Viktoria Plzen had briefly given their travelling fans from the Czech Republic something to cheer when Jan Sykora headed past Marc-Andre ter Stegen, but Barca – and Lewandowski – proved far too strong.

Lewandowski completed his hat-trick after 67 minutes following an assist by former Manchester City forward Ferran Torres, who added the fifth.

“Lewandowski showed his class tonight. He is rightly considered one of the best forwards in the world,” said Viktoria Plzen boss Michal Bilek.

He has now scored 32 goals in his last 20 Champions League group stage matches.

This result was the perfect start to Group C for Barcelona, who face Bayern – 2-0 winners at Inter Milan – next Tuesday (20:00 BST).

Lewandowski joined Bayern on a free transfer in 2014 after his departure from Borussia Dortmund and scored 50 goals in 46 games last season as he helped Bayern win a 10th straight Bundesliga title.

He scored 344 times in 374 games for Bayern and is their second-highest scorer of all time behind Gerd Muller.