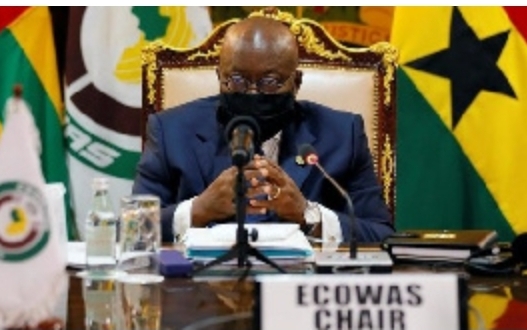 The Ghanaian leader was speaking at the extraordinary summit of the Authority of Heads of State of ECOWAS held in Accra on Thursday, 3 February 2022.

President Akufo-Addo noted that the trend of coup d’etats in the sub-region needs to be “addressed jointly and authoritatively before it gets out of hand”.

The ECOWAS Chair had earlier, during the virtual ECOWAS summit held on Friday, 28 January 2022, urged his colleague heads of states to collectively deal with the problem of coups in the region.

“Let us address this dangerous trend collectively and decisively before it devastates the whole region. Excellencies, the resurgence of coups d’état in our region is a matter of grave concern.

“This evolution challenges the democratic way of life we have chosen. We need to stand firm to protect democracy and freedom in our region,” the ECOWAS Chair stated.

Meanwhile, a statement issued with regards to the political situation in Burkina Faso following the extraordinary summit of the heads of state noted that: “The authority reiterates its absolute condemnation of the coup d’état of 24 January 2022 and expresses concern over the continuous detention of President Roch Marc Christian Kaboré.”

It continued that: “In this regard, and subject to sanctions, the Authority demands the unconditional release of President Roch Marc Christian Kaboré.”

The heads of state of ECOWAS heads also held “the suspension of Burkina Faso from all ECOWAS institutions until the restoration of constitutional order“.

They further called on the “military authorities to establish the transition institutions, adopt a transition calendar and facilitate the return to constitutional order as soon as possible”.

With regards to Guinea, the Authority expressed “concern over the unavailability of the required transition calendar five months after the coup d’état, as requested by the Extraordinary Session of the ECOWAS Authority of Heads of States and Government held on 16 September 2021”.

It, therefore, decided “to uphold all the sanctions already imposed on Guinea” while requesting the country’s Transition Authority to “provide to ECOWAS an acceptable timetable for restoring constitutional order.”

While, it stated that “the Authority regrets the unavailability of a new timetable in line with the decisions of the Authority,” on the Malian situation.

It added that it will “uphold all the sanctions imposed on Mali, in line with its decision of 9 January 2022”.