According to the poll, the current Ag. National Chairman, Freddie Blay will win by 53% margin as against 47% by Stephen Ntim.

With respect to Vice Chairmanship positions, the poll concluded that points to F. F. Antoh as likely to emerge as the 1st Vice Chairman with Rita Talata Asobayire and Omari Wadie as the 2nd Vice Chairperson and 3rd Vice Chairman respectively.

The poll asserts that the current Acting General Secretary, John Boadu will win massively by polling 78% of valid votes cast as against 22% by Richard Ahiagbah.

Again, the polls stated that Sammi Awuku will emerge as the National Organizer of NPP with an emphatic endorsement of 94%.

The current National Treasurer of the NPP, Abankwa Yeboah is likely to narrowly win by 41% with Mary Porch and Nuhu Mahama trailing closely with 39% and 20% respectively.

According to the polls, Henry Nana Boakye (Nana B) will win the National Youth Organizer race which seems to be the most fiercely contested Position. The polls show 55.6% of delegates voting for Nana B: 22.22% voting for Dominic Kwesi Eduah: 21.9% voting for Kamal-Deen Abdulai: and 0.28% voting for Nana Bediako.

Kate Gyamfua is said to emerge as the National Women’s Organizer of the N.P.P according to the polls. The polls show 58% of the delegates voting for Kate Gyamfuah whiles the remaining 42% vote for Joyce Konokie Zempare.

The one month lasted polls which ended on the 29th June, 2018, conducted by the National Security employed structured questionnaires.

The sample size was 4,121 delegates drawn from the 275 constituencies, 10 Regional Executive Committees, 187 TESCON branches across the country, diaspora delegates, MMDCEs, Ministers and deputy ministers of state.

Former president of the republic of Ghana, John Dramani Mahama, has shared his life-changing experience … 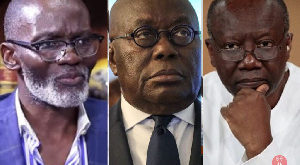 Minister of Finance Ken Ofori-Atta announced a Domestic Debt Exchange on December 4, 2022; with …