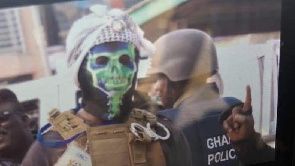 A leaked letter has exposed plans by the Upper West Regional Coordinating Council and its Regional Security Liaison to recruit and train New Patriotic Party (NPP) activists for the 2020 election.

The leaked letter, addressed to the constituency chairmen in the region, said the activists, to be known as the “Election Security Team,” are expected to, among other things monitor the upcoming limited voter registration exercise and guard ballot boxes during the elections.

“Grateful you submit a list of suitable security oriented party members for training as Election Security Team to closely monitor the 2020 elections starting from the re-opening of the voters register through to the actual elections and up to the declaration of results,” Capt. Tengabo noted.

The list, according to the Regional Liaison Officer must include a leader of the party in the region and 10 others.

“After their training/orientation, the teams will in turn select and also train polling station Elections Security Team to cover all polling stations in your area.

The request for NPP activists to be recruited and trained to provide security comes on the heels of the Ayawaso West Wuogon by-election shooting incident and a government sponsored security retreat.

At least 13 people were injured in the shooting incident which has led to the formation of a commission of inquiry.

The commission, chaired by the former Commission on Human Right and Administrative Justice boss, Emile Short, is expected to public hearing soon.

Previous ‘Atta-Mills bled from his nose, ears and mouth but no one called Mahama ‘Bloody’ President’ – Abronye DC fires
Next Paying 13 children’s school fees not easy; I won’t add any more – Kennedy Agypong