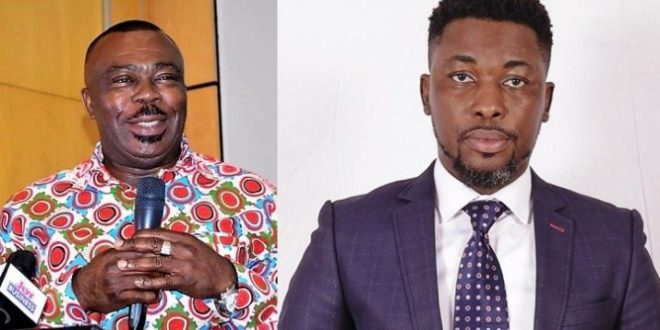 JUST IN: LEAKED CHATS of A PLUS and Asamoah Boateng pops up

Controversial Ghanaian musician, Kwame Asare Obeng otherwise known as A Plus has picked a big fight with the Executive Chairman of the State Enterprise Commission (SEC), Mr Stephen Asamoah Boateng.

He has described him in a leaked chat as an evil uncompleted idiot who is trying to reap where he has not sown following the government appointee’s decision to claim a parcel of land A Plus says he has no title to.

A structure on the said land which the New Patriotic Party (NPP) supporter insists belongs to a young man based in the USA, has since been demolished on the alleged orders of Mr. Asamoah Boateng.

In a thread of heated argument and insults both hurled on each other on social media, the former Information Minister describes him as a fucken idiot but in a return jab he brands him as a an evil uncompleted idiot.

“Herh!!! Kwasia add lorry fare. I should come all the way to Kormantse for a fight? Call me when you come to Accra okay? Uncomplicated idiot!!!

Giving a background of what may have triggered the fight, A Plus wrote on his Facebook wall a lengthy post sighted by MyNewsGh.com

After everything that you have, you are fighting over a piece of land with a young man who is hustling in the cold. You don’t have a title to the land yet you went and demolish the property. You asked this man to come and see you when you were in America so that you talk and settle the case amicably. This young man left his job and drove about four hours from Dallas all the way to Houston. He got there hours before time but Asabee told him that he was on his way to catch a flight to London.

Asabee is evil!!! We will not leave this matter until the young man finds justice.

And you have some stupid young people who support this Asabee guy. Ah!!!

Tags A plus Asamoah Boateng