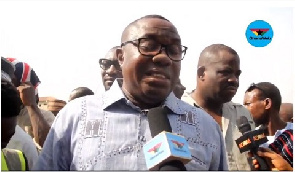 The chairman of the opposition National Democratic Congress (NDC), Samuel Ofosu Ampofo, has reiterated that he is a man of peace and he will under no circumstance undermine the peace and stability of the country.

“The NDC chairman is a man of peace. I have been in politics for the past 30-years, there is no record that any insult has ever proceeded out of my mouth. I have led the party and we have always come out peacefully in all that we do. My decision in the recent by-election at the Ayawaso West Wuogon indicates that I’m a very peaceful person because I will want to protect life and property than political gain” he said.

Samuel Ofosu Ampofo was addressing a crowd of NDC supporters who had gathered outside the police headquarters Monday morning when the party chairman together with some executives visited the CID for questioning over an alleged audio recording which has some security implications.

He further commended the Ghana Police Service for handling his case professionally.

The Criminal Investigations Department of the Ghana Police Service on Wednesday, February 27 invited the National Democratic Congress over the leaked tape in which he is allegedly heard calling for relentless attacks on the chairperson of the Electoral Commission, Mrs. Jean Mensa.

In the leaked audio, Mr. Ofosu-Ampofo told party communicators that “we’re going to take her [EC boss] to the cleaners.”

As part of strategic communication plans for the NDC going into the 2020 elections, Ofosu-Ampofo also gave his blessings for the communicators to verbally attack the Peace Council chairman Professor Emmanuel Asante.

A statement by the Police CID said Mr. Ofosu-Ampofo must report at the CID Headquarters in Accra on Thursday to help with investigations.

Meanwhile, the NDC has strongly denied contents of the leaked tape saying that the statements and attributions contained on the said tape are concocted and false and “inconsistent with the character and track record of Chairman Ofosu Ampofo and do not reflect the values he has always stood for.”

According to the party, “the maliciously depraved and clearly doctored tape has been contrived by some devious elements in the NPP and government to undermine the NDC and its National Chairman.”