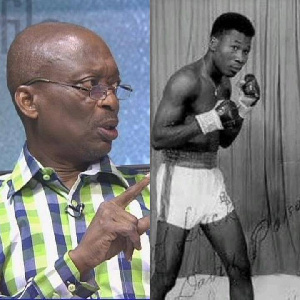 Seasoned Journalist, Abdul Malik Kweku Baako has flipped his lid over D.K Poison vs the Government of Ghana case.

President Nana Addo Dankwa Akufo-Addo has directed that the US$45,000 Ghana owes the professional popular Ghanaian boxer, David Kotei, affectionately called D.K Poison be paid to him on “compassionate grounds”.

A letter signed by the Secretary of the President, Nana Asante Bediatuo read: “I write to convey the approval of the President of the Republic for an amount of Forty-Five Thousand United States Dollars (US$45,000.00) to be paid to Mr David Kotei (a.k.a. D.K. Poison) on compassionate grounds.”

The 69-year-old D.K. Poison has over the years complained bitterly about how he loaned the Government of Ghana a whopping amount of money but had not been refunded.

He narrated giving $45,000 out of his purse of $75,000 from his second title defence against Japanese Shig Fukuyama to Ignatius Kutu Acheampong government in 1976.

The money was purposed for the purchase of some commodities for the State but 44 years on, the renowned retired boxer has made numerous attempts to retrieve his money and all attempts proved futile.

There have been incessant calls on successive governments to repay the money but none of the governments paid much attention to the pleas by D.K Poison until now that President Nana Akufo-Addo has asked for the refund to be made.

In October last year, he met President Akufo-Addo and during his interaction with the President, reiterated his case which received a favourable response.

Kweku Baako, speaking to host Kwami Sefa Kayi on ”Kokrokoo” on Wednesday, October 7, 2020 commended the President for refunding the money to D.K Poison on “compassionate grounds”.

However, he finds it ridiculous and absurd that the State of Ghana would borrow from a boxer.

He questioned how low-sinking the economy of Ghana was under the Acheampong regime to have asked D.K Poison to lend them the aforementioned amount.

“Ridiculous; absurdity of the highest order! Why did it happen? I’m not even for a moment saying it didn’t happen; let nobody get me wrong. If it happened, then you can see how low the State of Ghana went,” he said.

To him, it is a blot on the country for the news to be out there that once upon a time the boxer loaned the Government of Ghana 45,000 dollars, and was of a strong view that the matter should be interrogated.

Kweku Baako suspected some people in the Acheampong government may have tampered with the money, hence disclosing a Commission of Inquiry was set up to probe the loans that were given to President Acheampong but ”nowhere is this 45,000 dollars mentioned; nowhere was this mentioned”.

“So, was it some private job somebody was doing using the name of the Republic. How low? We sunk that low. I know there were problems but what was the State going to do with 45,000 dollars . . . The State of Ghana contracted 45, 000 loan from a boxer to do what and how? What happened to Nkrumah’s Ghana?” he queried.

“Would it not be so ridiculous for the State of Ghana, even under the bankrupt military dictatorship of Acheampong, to go so low and take a loan from one individual Ghanaian who is just a boxer; not a businessman, not a multi-millionaire? Come on! What!. . As a nation, are we damn proud? Are we very proud of ourselves? My goodness; what a disaster!,” Mr. Baako snapped.

Meanwhile, there are ongoing arguments over whether or not D.K Poison’s 45000 dollars should be paid with interest or not, taking into account the money has spanned over four decades.

The Managing Editor of the Insight newspaper, Kwesi Pratt is an advocate for the interest payment.

He further argued that ”there is a trail of evidence that the money was lent to the state…even though it’s better than nothing, the value (of the money) is no longer the same…There is historical evidence that the money was given to the state…There are people who vouch that he indeed gave money to the government then. There is no doubt about the fact that the government took money from him. It is not by word of mouth”.