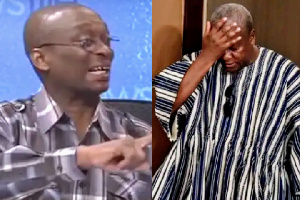 Abdul Malik Kweku Baako has advised the flagbearer of the opposition National Democratic Congress (NDC), John Dramani Mahama to use legal means in challenging the verdict of the 2020 elections if he strongly disagrees with the outcome.

Speaking on Newsfile on Saturday, December 12, 2020, the Editor-in-Chief of the New Crusading Guide stated that will be the only way John Dramani Mahama and the NDC to cure the mischief they complain about.

“…this is the only legitimate way to kill the [alleged] mischief which he [Mr Mahama] is complaining about.

“Anything else Mr Mahama does; demonstrations, hunger strike, everything, though legitimate and democratic, they are not a substitute for judicial determination relative to declarations made by the EC,” he said.

He further indicated that the events from 2012 when President Akufo-Addo challenged the outcome of the election at the Supreme Court “informed the improvement and progress the country has made in its election architecture.”

Baako noted that “It’s quite an ironic situation that now the tables have turned and President Mahama may have to go to court.”

“Indeed, he was the beneficiary of a similar incident in 2013 during the election petition when he was an incumbent and President Akufo-Addo, Bawumia and others were disputing the election results, and we all saw what happened.

“I wish he does same because it will improve the democratic dispensation that we have given ourselves since the past years,” Kweku Baako Jnr stressed.

The NDC has alleged that the Electoral Commission (EC) liaised with the governing New Patriotic Party (NPP) to overturn results of the just-ended polls.

John Dramani Mahama, who led the party into the 2020 election at a press conference after the EC declared President Akufo-Addo winner of the presidential race, described the elections as ‘flawed and fictionalised.’

He said data available to his party from across all the 16 regions of Ghana shows that he had won the 2020 Presidential Elections and that any other pronouncement by the EC was evidence of manipulation of figures.

He has since rejected the outcome of the elections.

Previous Zodwa Wabantu causes stir as she parades her raw derriere in latest IG video
Next Livestreamed: Ghana vs Ivory Coast (WAFU Zone B U20 Cup of Nations)