Legon Cities striker Asamoah Gyan went in hard on a journalist who sought to question his usefulness to relegation-battlers Legon Cities.

In the aftermath of Legon Cities’ heavy victory over Ashgold, Gyan posted on Instagram, a jama session he had with his teammates which featured Black Stars defender Jonathan Mensah.

Desmond Decker, a sports journalist who used to work with the Class Media Group quizzed if Gyan was signed to lead jama sessions or play football.

“Aahh was Asamoah Gyan signed for jama or football games”, he commented on Gyan post.

The former Black Stars skipper replied with a barrage of insults on the journalist.

“The people you follow are even plenty than your followers. Kwasia like that. You only go on the people people who have made it to write negative comments. Yes, cos your life is negative, that’s why you are frustrated. Aboa”, Gyan fired back.

Gyan who joined Legon Cities at the start of the 2020/2021 season has made just three appearances for the club.

He has been out since mid-December with a calf injury.

Bashir Hayford, the head coach of Legon Cities remains hopeful that he will recover in time to play for the team in the first round of the GPL.

”Asamoah Gyan complained about his groin just two days to our game and the physio gave him two weeks to come back, there is no coach who will have Asamoah Gyan in his team and bench him. If Gyan is even just 20% fit I will use him, I can only say that hopefully, we might see him before the end of the first round,” he said. 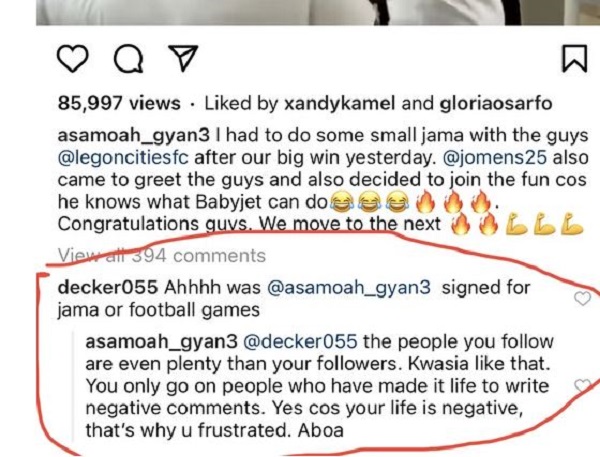