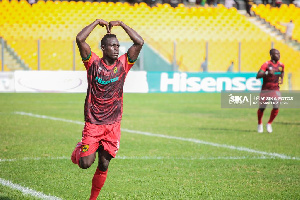 The enterprising forward signed a four-year deal with the club for €500,000 on Wednesday on the transfer deadline date.

According to reports, the club will grant the player permission to be with the Black Stars team for the upcoming 2021 African Cup of Nations qualifier games against South Africa and Sao Tome before flying to Algeria should he make Akonnor’s final squad which will be announced later this week.

The player will also be given a brand new Benz C3 Class vehicle when he arrives in Algeria plus other special incentives.

Poku has been sensational for Asante Kotoko in the ongoing Ghana Premier League netting seven goals so far.