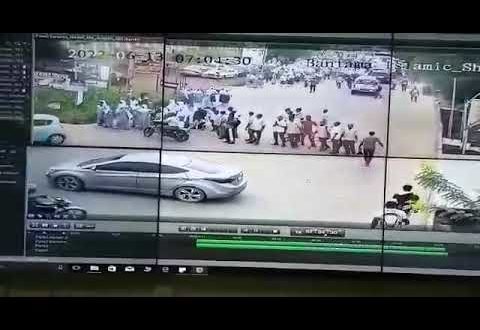 Over 30 students of Kumasi Islamic SHS rushed to the hospital

The Inspector-General of Police, Dr George Akuffo Dampare, has ordered the interdiction of four more police officers over the disturbances recorded at the Kumasi Islamic Senior High School last week.

The said officers were caught on tape making Islamophobic comments while reviewing CCTV footage of the chaos that occurred when police officers stormed the school to disperse a student protest last Monday.

In a video that has gone viral on social media, one of the officers running commentary while reviewing the CCTV footage is heard saying, “have you seen their attitude [referring to students of the Islamic SHS]? Do you think if it was an Akan school, they would behave that way?” Another said: “They are dirty. They are dirty! Wherever these Muslims are, there is problem….”

Following this development, the Operations Commander of the Ghana Police Service, DCOP Mohammed Suraji, on behalf of the Inspector General of Police, has led a delegation to visit the Zongo Chief of Kumasi, Alhaji Umar Sulta Farouk.

According to a report by Asaaseradion.com, DCOP Suraji confirmed the interdiction of the officers during the visit.

“Such [a comment] doesn’t represent the Ghana police. So, we are here to apologise. As I speak, the officers, including a chief inspector, have been interdicted. They are under service inquiry for exhibiting such unprofessional conduct, and we support this decision. We should treat this with the contempt it deserves,” DCOP Suraji said.

DCOP Suraji emphasised the assurance of the police to respect every Ghanaian irrespective of their political, religious or tribal background.

The latest interdiction by the police administration brings to seven the total number of officers interdicted for the disturbances recorded at the Kumasi Islamic Senior High School.

Students of Kumasi Islamic Senior High School on Monday, June 13, 2022, caused heavy traffic on the Abrepo road that runs in front of their campus to register their displeasure over frequent accidents in the area.

The aggrieved students said they and their teachers had become victims of constant pedestrian knockdowns and sought to bring attention to their plight through the protest.

However, a police contingent called in to calm the students decided to fire gunshots and teargas to manage the situation.

This resulted in a more chaotic situation in which some 30 students fell unconscious and had to be rushed to the hospital.