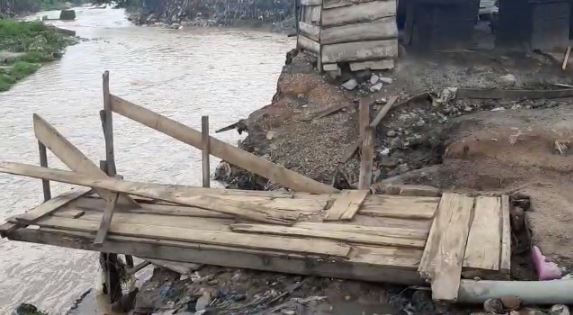 Several residents crossing the Sesa River to and from Anloga, Bomso, Ahinsan, and the KNUST campus are left stranded

The only wooden bridge connecting this passage was washed away by Wednesday night’s heavy rains.

This is the fourth time the 15 meter wooden bridge which stretches across the 7 feet deep Sesa River has been destroyed in the flood-prone area.

Residents who use the bridge had to turn away or travel long distances to use alternative routes to get to their destination.

The residents were frustrated the recurrence of the situation leaves several people stranded.

“It has made living here very difficult. we have KNUST around us and there are students who use this bridge to get to the other side. We also have relatives who live at the other end who come here to get vehicles to go to town. We are pleading with government to come to our aid, Mawuli Doe told Ultimate News.

A woman who gave her name as Adjoa Tweneboah lamented that traders could not use the area to the market and back whenever the bridge broke off.

She told reporter Ivan Heathcote – Fumador, “We are begging government to come construct a steel bridge here for us to help solve this problem.”

A lotto agent who lives close to the river bank was angered members of parliament and assembly members alike have campaigned with promises to build the bridge and yet failed to do anything about it.

Unit Committee member for the Anloga East electoral area Francis Dougham recounted that the collapse of the bridge could have led to fatalities as it completely collapsed no sooner than the last person stepped off.

“Immediately I sacked everyone from the bridge the river just carried it away. We are living in fear of losing lives. This place is a major route for several people and deserves a steel or concrete bridge,” he averred.

The assembly member was not readily available to speak to Ultimate News.

We however gathered that the assembly is taking steps to assemble engineers to assess the damage ahead of plans to put in a stop-gap measure.

Previous Man, 31 crashed to death at Gomoa Buduburam
Next Karela United beat Ghana U-17 team in a friendly