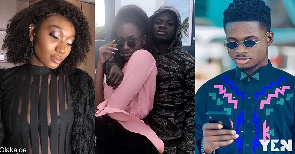 The Snapchat user has been exposing the dirty lifestyle of top Ghanaian celebrities over the past 72 hours and last night, the Snapchat user accused the Angela hit maker of using his fame to chop girls. Wendy Shay was mentioned to be one of the girls Kuami Eugene has treated and discharged.

Also, he’s been accused of getting infected with GONO after going raw with one UPSA girl among other allegations. Below are the screenshots of what the Snapchat user posted some hours ago.

Previous I am spreading the virus – Moesha Boduong
Next African giants, Senegal and Nigeria, elect presidents