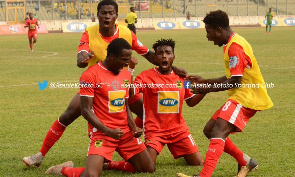 Kumasi Asante Kotoko will continue their CAF Confederation Cup campaign tomorrow when they clash with Zambian side, Nkana FC, at the Nkana Stadium in Kitwe.

Kotoko face a tough task to overcome another Zambian side, who have remained unbeaten at home on the continental stage in the past four decades.

Nkana FC will hope to maintain their impressive home record tomorrow, having earlier defeated Sudanese giants Al Hilal 2-1 in Kitwe a week ago.

Nkana, who boast 12 Zambian Premier League titles, are not new to Ghanaian opponents, having eliminated Hearts from the African Cup Championship in 1986 on a 3-1 aggregate, while losing to the Porcupine Warriors in the quarter-finals of the 1993 competition via a 3-1 aggregate.

In a bid to avoid a second away defeat, Kotoko’s coach, Charles Akonnor, has hinted that he will adopt an attacking approach to ensure at least a draw tomorrow.

Coach Akonnor included experienced midfielder Jordan Opoku in his 18-man squad for the first time since their 2-1 win over Kariobangi Sharks in the return leg of the playoff in Kumasi, and will be counting on him to inspire the likes of Felix Annan, Songne Yacouba, Emmanuel Agyemang Badu, Maxwell Baakoh and Emmanuel Gyamfi , among others, to replicate their impressive win against Zesco United last week.

However,, Coach Chambeshi of Nkana FC will be counting on Walter Bwalya and Freddy Tshimenga, who scored against Al Hilal in their previous game, to replicate the same performance against the Porcupine Warriors.