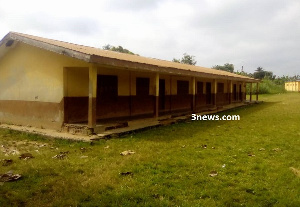 Kokofu D/A JHS closed down after assault on headteacher

The Kokofu D/A Junior High School near Goaso in the Ahafo region has been closed down temporarily following an assault on the headteacher a week ago.

A group of young men and women stormed the school premises and assaulted the headteacher for canning a pupil of the school.

According to some teachers of the school, the headteacher who was posted to the school this academic year to restore discipline and promote teaching and learning, usually give numbers to the pupils and cane those who are late.

His action angered residents of Kokofu community who besieged the school and attacked the headteacher Mr. Paul Marfo Boakye in retaliation after a pupil who was canned reported his conduct.

He sustained wounds and was initially admitted at the Goaso Municipal Government Hospital but was later transferred to Sunyani Regional Hospital for treatment.

This compelled the Ghana National Association of Teachers (GNAT), to demand the closure of the school, until the perpetrators are brought to book.

He has appealed to the Ghana Education Service to transfer all the teachers in the school who feel in-secured when the school re-opened.

3News’ checks in the school revealed that classrooms are currently under lock and key.

Meanwhile, most of the teachers in the surrounding schools have boycotted classes in solidarity with their colleagues in the school.

“This is the first time I have heard of a pupil going out to call thugs to come and beat a teacher in the school.

“This is just barbaric and we can’t sit down and say nothing. For the sake of the children, GNAT asked the school to be closed down to keep both teachers and pupils safe.”

Meanwhile, the Goaso Police Command where the case was reported has arrested three residents – two men and a woman – to assist in its investigations.

The Ghana Education service (GES) was yet to officially comment on the issue at the time of filing this report.

Previous Mighty Warriors embark on “Thank You” trophy tour in the Volta region
Next Shooting at Mankessim, police officer shot, 2 dead,5 in a serious condition