Lecturers at the Kwame Nkrumah University of Science and Technology (KNUST), have taken a decision to call off their strike after the Chancellor of the school, the Asantehene, Otumfuo Osei Tutu II assumed leadership in resolving the ensuing impasse on campus.

This comes after a high-level stakeholder meeting on Monday at the Manhyia Palace in Kumasi, where it was also agreed that the embattled Vice Chancellor of KNUST, Prof. Kwasi Obiri-Danso, should be reinstated on the University’s council.

The National President of UTAG, Dr. Eric Opoku, in an interview on Eyewitness News said they were happy about the decision, and were optimistic that Otumfuo Osei Tutu II will help resolve all outstanding challenges concerning the school.

“We are certainly going to call off the strike first on KNUST campus… The position of the National UTAG to encourage all the other campuses to solidarize with KNUST is going to end. We are happy with the decisions that have been made today [Monday],” he said.

“Prof. Obiri Danso is being restored on the council….[and] the government is going to replace its reps on the KNUST council and all other unions which are represented on the council are supposed to present their reps, and by Friday, the new council will be reconstituted and then IMC ends,” he noted.

The government constituted an interim University council last week after it closed down KNUST over a violent student protest. It gave the council a 3-month tenure to work towards addressing the impasse between students and the university management, while making sure the University reopens before November 8, 2018.

The interim council, which had 7 members, was without the Vice Chancellor of KNUST, but had the student body represented.

This generated a lot of controversies and caused agitation among various stakeholders including the lecturers, administrators, senior staff and education workers of KNUST with the lecturers and administers declaring an indefinite strike over the matter.

They insisted that they will not return to work until the Vice Chancellor was added to the council.

The government however surprisingly announced a day after the strike that it had added a representative each of UTAG and TEWU to the interim council.

Reports later suggested that both associations had rejected the offer from the government.

The aggrieved stakeholders, therefore staged a demonstration on campus on Monday, October 29, 2018, as government issued a statement indicating that it had ordered the embattled Vice Chancellor to vacate his office at the University and hand over to the Pro Vice-Chancellor. 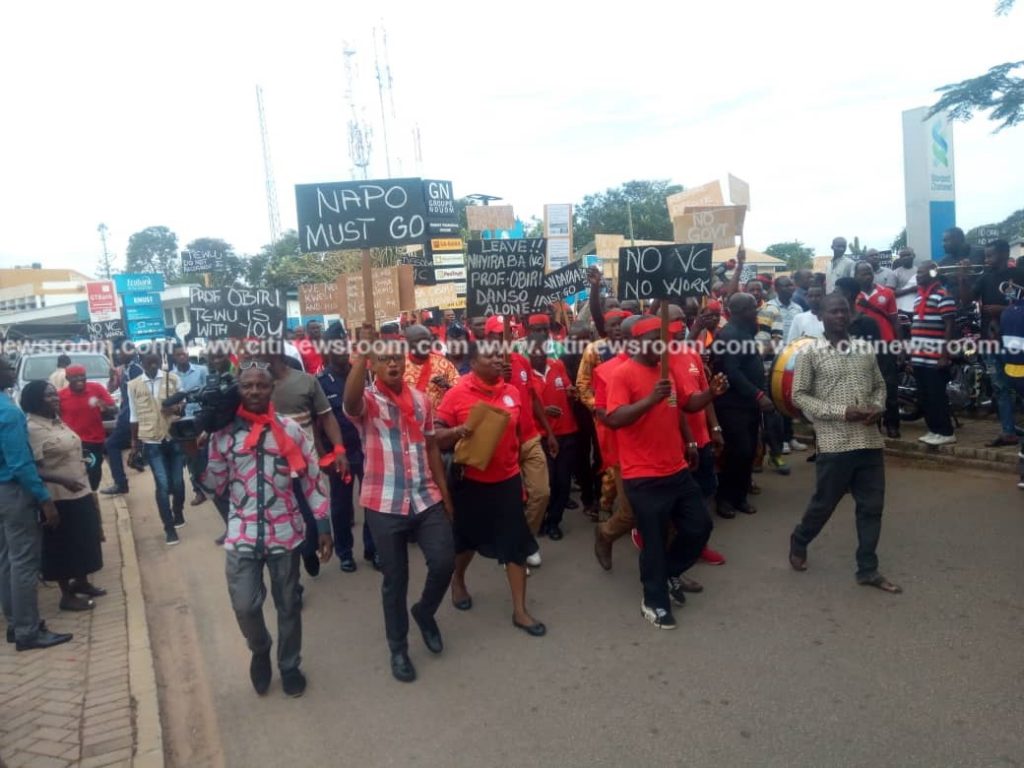 Later, reports revealed that the Chancellor of KNUST, Otumfuo Osei Tutu II, was not happy about the development and expressed his sentiments at the closed-door meeting with stakeholders at the palace on Friday afternoon.

A government statement after the meeting said Otumfuo was now going to lead processes for the reconstitution of a new council by Friday to immediately take over from the government’s interim governing council.

Dr. Eric Opoku, who welcomed the development said “this is the right thing to do,” especially as there has been proper deliberation with all stakeholders to have the issues amicably resolved.

“The ultimate thanks go to Otumfuo Osei Tutu for taking things in his hands as Chancellor of the University and intervening in this matter. We are happy with it, and we think that this is right thing to do…that through proper deliberation, issues are resolved amicably. I think this is a positive outcome,” he said.

“I know that once the new council is in place, they will take steps to address all the issues which are yet to be addressed,” he added.

On Tuesday, November 29, 2022, GhanaWeb reported about a clash between the Ashanti Regional Director …