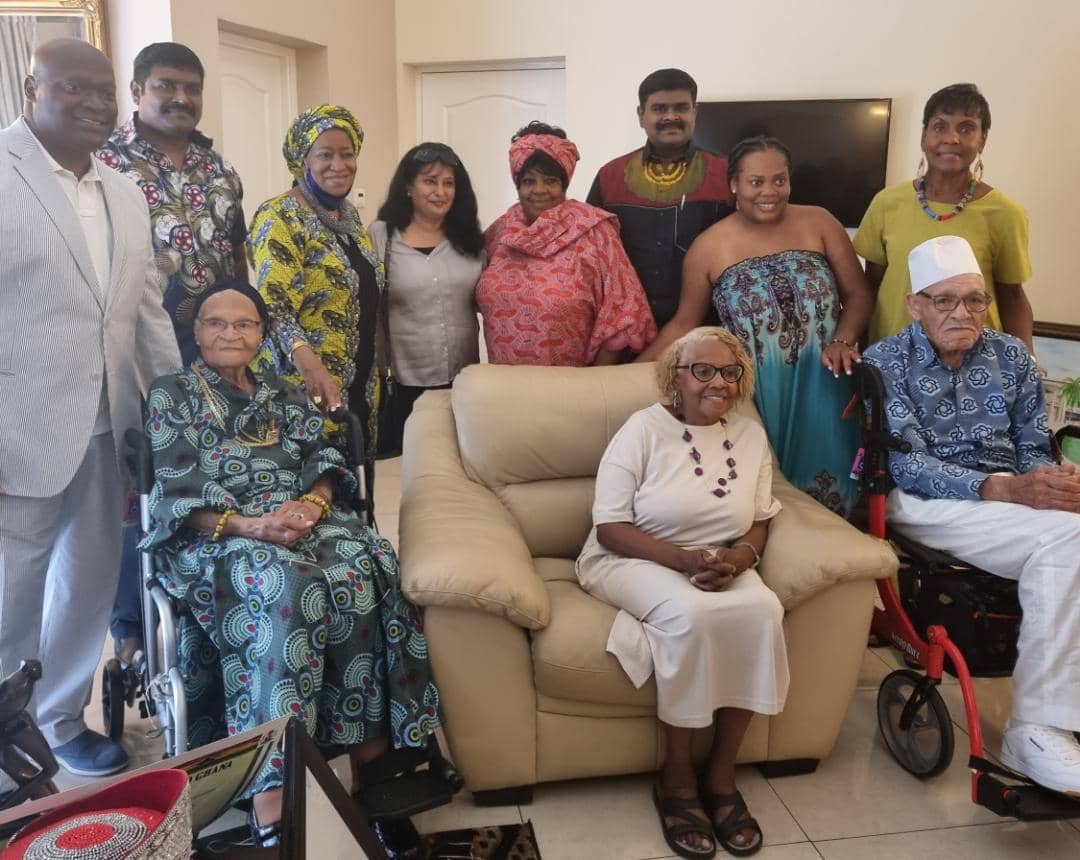 The two African-American survivors of the century-old Tulsa Race Massacre recently visited Ghana with their grandchildren to connect with their “motherland.”

Viola Fletcher, aged 107, known as ‘Mother Fletcher’, and her brother Hughes Van Ellis, 100, known as ‘Uncle Red’, are from the district of Greenwood in the Oklahoma city of Tulsa.

In 1921, a mob of armed white folks carried out the massacre against Blacks.

The visit of the two survivors to Ghana was aimed at helping them to replace the 100 years of bad memories with knowledge of positive developments in their “motherland”.

CEO and MD of Kingdom Exim Group of Companies, Dr. James Rajamani and Dr. Immanuel Rajamani, had the privilege to meet and extend their best wishes and some Souvenirs to Mother Fletcher, Uncle Redd and their entourage at La Palm Beach Resort.

Persons who attended the event expressed that it was
indeed a great pleasure for them to have met Mother Viola Fletcher and Uncle Redd.

History of the Tulsa Massacre

On May 31, 1921, a group of Black men went to the Tulsa courthouse to defend a young African-American man accused of assaulting a white woman. They found themselves facing a mob of hundreds of furious white people.

Tensions spiked and shots were fired, and the African Americans retreated to their neighborhood, Greenwood.

The next day, at dawn, white men looted and burned the neighborhood, at the time so prosperous it was called Black Wall Street.

In 2001, a commission created to study the tragedy concluded that Tulsa authorities themselves had armed some of the white rioters.

Historians say that as many as 300 African American residents lost their lives, and nearly 10,000 people were left homeless in the 1921 incident that drew the white against the black.

About Kingsair travel and tour

Kingsair travel and tour is a subsidiary of Kingdom Exim Group of Companies, a leading agro-based conglomerate.

The Kingdom Exim Group has been in existence since 2008, operating mainly in the Bono, Bono East, Ahafo, Greater Accra, Northern, Upper East, and Savannah Region.

As a leading agro-based company, the Group liaises with farmers of tree crops such as Raw cashew Nuts shea-nut, soya bean, maize, among others.

The works of the Kingdom Exim Group have widely gained recognition, helping the group to win several awards – both locally and internationally.