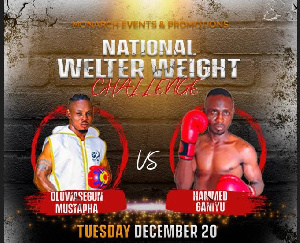 Four years after the inaugural edition, all is now set for the second edition of the King of the Ring boxing tourney.

According to the organisers, at least 10 bouts will be on the cards at this year’s event billed for 20 December at the Eko Club Surulere Lagos.

Some of the other fights will see Nigeria UK-based Super Middleweight Ezra Arenyeka taking on Frank Dodzi of Ghana, while in the Light Heavyweight category, Victor Beneth and Joseph Tetteh of Ghana will be slugging it out.

For the Super Lightweight, Temirzhan Baimolda from Kazakhstan and Waliu Arogundade of Nigeria will be engaged in a supremacy battle.

There will also be a Female Bantamweight contest between Youth Olympics Silver medalist, Adijat Gbadamosi (6-0-0) vs Taiye Kodjo as well as the ‘grudge fight’ between Agege-based Warriors, Oluwasegun ‘Bouncing’ Mustapha and Hammed ‘Eshe’ Ganiyu.

There also be four other bouts.

King of the Ring 2 was earlier billed to hold in Ghana but the CEO of Monarch Events and Promotions, Prince Stanley Williams told PREMIUM TIMES he opted to bring it ‘home’ so boxing fans in Lagos and the environs can enjoy a swell time this festive period.

“We are making this second edition even bigger. Apart from the top fighters that would be showcasing their prowess, we are marrying Boxing and Music this year, with some top artists also lined up to perform. The event will be streamed live on www.Fite.tv” he said.

As stated by the organisers, Timi Dakolo will be headlining the music end of the show with other musical acts like Jaywon, B-Tone, C-Prince and CDQ, also performing at the Eko Club, Surulere.

Tickets for the King of the Ring showdown are already on sale.

Previous George Quaye explains why Ghanaians, foreigners have a passion for Black Sherif’s songs
Next Trevor Noah’s last act on ‘The Daily Show’: Kamala Harris, Oprah, Hillary, others in ‘attendance’