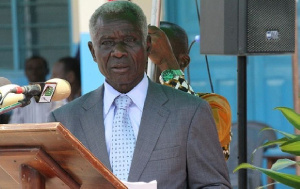 Former Chief of Defence Staff Brigadier-General Joseph Nunoo-Mensah (rtd) has noted that Ghana is becoming a failed state due to the indiscipline among some of the people living in the country.

He blamed this development on politicians who, he says, have prevented the laws from working against offenders who belong to their political parties.

Contributing to discussion on the killing of the Mfantseman Member of Parliament, Ekow Kwansah Hayford, and other murder-related issues in the country on The Key Points programme on TV3 Saturday, October 10, Brigadier-General (rtd) Nunoo-Mensah said until the law is made to bite offenders without fear or favour the indiscipline is likely to persist.

“Ghana is gradually becoming a failed stated. The laws are not being allowed to work. People drive anyhow, that is indiscipline, people are selling on the streets you can’t drive. Unfortunately, we are mixing law with politics,” he said.

The Dean of Academic Affairs at the Ghana Armed Forces Command and Staff College, Dr Vladimir Anwti Danso, also observed that the creeping insecurity of the country can be attributed to the indiscipline in the country.

He explained on the same programme that laws are being disregarded with impunity.

People no longer believe in the institution of state, he added.

Mr Antwi told host Abena Tabi that “a security situation gets exacerbated when you have a general kind of thinking about security”.

“The point is that politics has redefined our kind of security. We need all tools in the toll box to get to power so we saw the rise of vigilantism for example which is not needed if you are really sane in thinking about what you want to do for our country.”

He added: “This sense of insecurity is also fueled by total indiscipline in the country , non obeisance to constitutionalism. It is like the constitution people don’t know and they don’t care about it. Institutionalism is also lost.