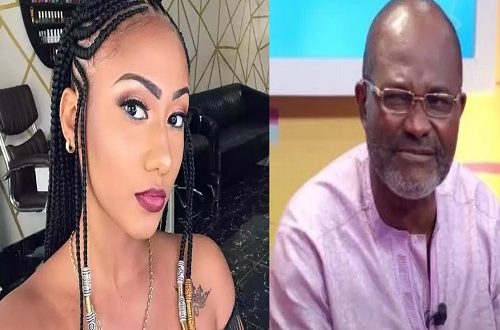 This wild threat comes in as a reply to Hajia4 Real’s defamatory lawsuit against the Ashanti Regional Chairman of the ruling NPP party well known as Chairman Wontumi.

This threat from Kennedy Agyapong comes after the slay queen Hajia4Real filed a lawsuit against the chairman for his derogatory comments about her.

The suit also gave Chairman Wontumi an ultimatum of 24 hours to retract and apologize publicly to Hajia 4 Real.

According to Wontumi, Ibrahim Mahama, the brother of John Mahama was the one who bought the new Range Rover and house in which Hajia received as a birthday present.

Popular Instagram blogger “Those Called Celebs” posted a screenshot on their page which stated that Kennedy Agyapong has threatened to exposed the slay queen for disrespecting Chairman Wontumi.

See the screenshot below;

Previous Dozens missing after boat capsizes in Nigeria
Next [PHOTOS]: Lady reportedly poisoned on her birthday over an iPhone 11