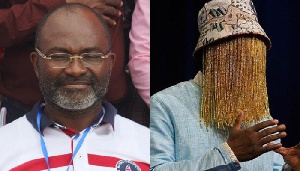 The Assin Central MP, Kennedy Ohene Agyapong, has promised to go all out to unmask Anas, the personality behind the veil of the most popular undercover investigations in Ghana.

Since the release of the Number 12 undercover investigations particularly, which delved into the corrupt practices of officials of the erstwhile Ghana Football Association administration, the MP has been a thorn in the flesh of Investigative Journalist Anas Aremeyaw Anas.

In his latest media engagement, which is focused on the journalist, Mr Agyapong alleged that he has intercepted some email conversation by the journalist with some names of notable personalities in the country, with the aim of being disgraced by the journalist.

He alleged that some of the names have been marked yellow which signifies that the person is under investigation and other ones with green inscription show that he (Anas) has completed investigating them.

The ‘Pound of flesh’ Mr Agyapong explained, signifies that you are Anas’s high target.

“I have always said that Anas is evil, he is not a genuine journalist. Ghanaians seem not to agree with me. I have a long list of people as far back as 2012 he has set up the aim of destroying them in life,” the MP said on Net 2 TV.

According to Mr Agyapong, the list includes important personalities that Anas has decided to investigate one by one just destroy them.

“One individual who has an asterisk against his name and also on the pound of flesh list is Prof. Kwabena Frimpong Boateng.”

Unlike Mr Cephas Arthur who has been compensated by the journalist, Dr Akuffo Dampare, according to Kennedy Agyapong, refused his bribe and hence he has been on his ‘Pound of flesh’ list.

“He has written that he gave a minister in the ruling NPP government US$35,000,” Ken Agyapong said.