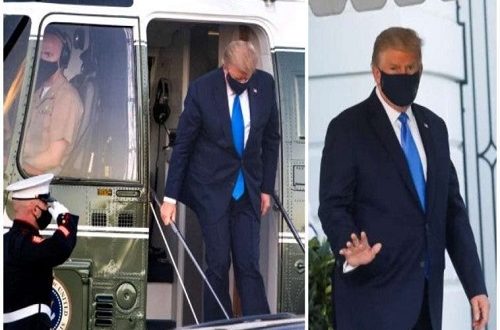 Just In: Donald Trump ‘having trouble breathing’ after contracting COVID-19

Trump, was dramatically airlifted to hospital on Friday evening, as he was rushed via helicopter to Walter Reed medical center near Washington DC out of an “abundance of caution” after after showing coronavirus symptoms – putting the US election in jeopardy with just weeks to go.

President Donald Trump is reportedly having trouble breathing and is very fatigued, a senior White House official has said.

According to reports, the US president’s condition seemed to be “serious” as he spent his first night in hospital after testing positive for coronavirus.

CNN reported an official saying there is “reason for concern” about his health and that the situation was “serious”.

But the aide also reassured the public that they should not be alarmed and has said Trump is taking the situation “very seriously”.

Hours after he was transported to the hospital via presidential helicopter Marine One, Trump tweeted: “Going well, I think! Thank you to all. LOVE!!!”

After it was reported Trump was “struggling to breathe,” White House doctor Sean P Conley said Trump was given a dose of Remdesivir and that the president is “doing very well” and “is not requiring any supplemental oxygen.”

Remdesivir, recently approved as an emergency treatment for Covid-19 is
used for the treatment of Ebola, SARS, and hepatitis C.