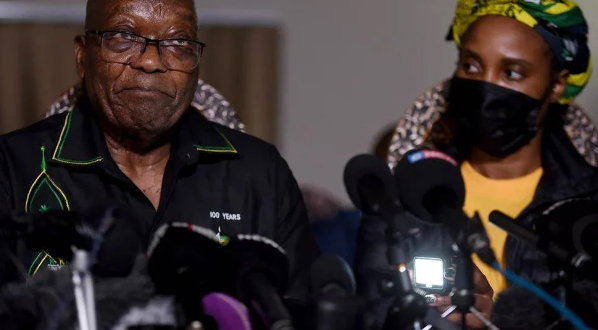 While former president Jacob Zuma’s daughter is being investigated in connection with the July unrest, she is not one of the 20 alleged instigators the Hawks arrested on Thursday.

The head of Hawks in KwaZulu-Natal, Major General Lesetja Senona, would not comment on any of the accused ahead of their Durban Magistrate’s Court appearance, only saying that things were “unfolding”.

Asked about Zuma’s daughter, Dudu Zuma-Sambudla, Senona was also guarded: “You shall remember that a person has deposed an affidavit against the daughter of the former head of state. That investigation is continuing.

“At this stage, we don’t want to divulge the status of the investigation. But once we have finalised the investigation, we will present our case to the National Prosecuting Authority (NPA) to make a prosecutorial decision.”

Zuma-Sambudla was vocal on Twitter during the 2021 unrest, often posting pictures of the destruction and carnage with the caption: “KZN we see you.”

She also uploaded a now removed video of gunfire directed at a poster of President Cyril Ramaphosa during the height of the unrest.

During testimony at the SA Human Rights Commission’s investigation into the unrest, Jean le Roux of the Digital Forensic Research Lab, said Zuma’s daughter had engaged in the most celebratory posts during the July unrest.

She was one of the accounts that was most engaging in the celebratory parts of unrest. She would take posts of buildings burning and have a tweet below it saying: ‘Amandla, we see you’.

“She did this quite prolifically throughout the period of the unrest. In some cases, she was also the one that took truck protests from the year before and attached that same statement to those tweets, giving the impression that these are protests happening in support of her father and his incarceration,” Le Roux said.

Careful coordination of violence and arson

Senona alleged that the group of 20 arrested on Thursday had carefully coordinated instigating the violence and arson in July 2021.

“We have enough evidence that these people were inciting each other and other people to commit public violence and arson. I would not want to dwell too much on evidence because it will unfold as court proceeds, but we are confident.”

The Hawks on Thursday evening announced that they had arrested 20 people from various parts of the country, including Gauteng, North West, Free State, the Western Cape and Northern Cape.

Senona, however, said that those appearing on Friday were mainly from KwaZulu-Natal, with one from the Free State.

When asked why it had taken more than a year for arrests to be made, he said there had been complexities.

“This is a complex and sophisticated investigation. We need to make sure when we investigate, everything must be done within the scope of the law. As Hawks, we did not want to arrest and then cases are withdrawn, because we will get pressure from communities because we are arresting and withdrawing.”

He said they would announce any other arrests once they had coordinated with the NPA, adding:

Once we are satisfied there is evidence against specific individuals, we will speak to the NPA about prosecutorial decisions. We are confident people will be convicted in this matter.

While Senona said the group of 20 had been “working as a team” he could not comment on other suspects around the country. He also did not want to be drawn into identifying the political affiliations of those arrested.

“The people arrested are both males and females, but I won’t know whether they are affiliated into a political party or not. For us as Hawks, we just investigate the crime committed and whoever is linked to the crime with evidence and then go and arrest.

“Maybe they will say something on that when they appear in court, but we don’t know anything about that.”

He stressed that he would not discuss evidence that was before the courts.

“The issue of evidence, I would not like to discuss that now because it is going before court. As proceedings unfold, some of the answers will emerge in that process.”

Tags but not among 20 arrested 'instigators' Zuma's daughter being investigated