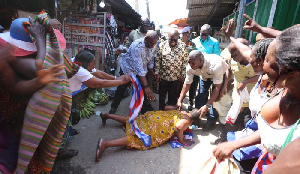 Hordes of market women yesterday expressed adoration for President Nana Addo Dankwa Akufo-Addo when he reached Makola market as part of his tour of the Greater Accra Region.

Some of the women were seen lying on the floor out of deference for the President.

From Makola, he proceeded to Mantse Agbona where he presented 6,336 outboard motors and other fishing equipment to fisherfolk who were also in a jubilant mood.

The President made the presentation through the Ministry of Fisheries, the Coastal Development Authority, the Agricultural Development Bank and CFAO at Mantse Agbona in Accra during the second day of his tour of the Greater Accra Region.

President Akufo-Addo indicated that “this is the first batch of outboard motors out of a total of 10,000 to be distributed to fisherfolk at subsidized prices.”

Thanking fisherfolk in the country for adhering to the closed fishing season, the President said “I am also happy to hear that the leaders and citizens appreciate the work that the government is doing.”

“I have been informed that the traditional priests (Wulomei) themselves have asked that another month be added to the closed season for the artisanal fishermen and for the trawlers; two more months. They themselves have seen the benefits of the closed season, so I would also like to ask that you also put a stop to the practice of light fishing. This way, we will really be able to see some progress,” President Akufo-Addo stressed.

The Minister for Fisheries and Aquaculture Development, Elizabeth Afoley Quaye, said, “Ever since we came to office, we have been gathering resources to get you as many outboard motors as possible. The Coastal Development Authority is bringing 5,000 outboard motors. ADB and the Ministry of Fisheries are bringing 1,336 as well.”

She added that the women engaged in fishing were going to benefit from small-scale loans.

“We will distribute the loans amongst members of the National Fish Processors Association for their use. This year, we have heard that you have caught a lot of fish and they just need the money to work on the fish. We are also bringing more Ahot? ovens, 3,000 of them,” she disclosed.

President Akufo-Addo yesterday also commissioned the reconstruction of the Otano Junction–School Junction road in the Adentan Municipality at the cost GH¢51.7 million.

During the commissioning, residents and road users highly commended the Akufo-Addo government for the effort and also thanked the contractor, Oswal Investment Limited, for completing within 7 months instead of the anticipated 24 months.

Roads and Highways Minister Kwasi Amoako-Atta said the Otano Junction-School Junction road is one of the fastest growing areas in Greater Accra and the road has a projected average daily traffic of about 30,000.

The minister said the reconstruction of the road was expected to improve the drainage situation of the area since several culverts and concrete U-drains had been fixed.

The Pokuase Interchange in Accra which was commenced in April 2018 is also taking shape and President Akufo-Addo appeared impressed with progress made so far.

At the commencement of his tour of some parts of Accra on Monday, the President visited the site at the Trobu Constituency in the Ga West Municipality and also inspected other important projects.

The project was originally proposed as a 3-tier single-point urban interchange and with government’s intervention, it was redesigned into a 4-tier Stack Interchange.

When the President visited the site, the contractor, Zhongmei Engineering Group Ltd, was busily doing road works, including drainage and pavement works and most of the auxiliary roads had been completed.

The contractor told the President that the 4 kilometres of asphalt dual carriageway had been completed for the Awoshie link of the project and landscaping, street lighting, road signs, pedestrian facilities were being done while 1 kilometre of asphalt single carriageway for the Kwabenya section was almost done.

Drainage works, retaining walls, earthworks were being constructed on the Accra to Kumasi highway towards the interchange in addition to the 2.8 kilometres of various sizes of outfall storm drains constructed as part of the project with all piles of foundation works almost done.

The progress to date for the various elements are as follows: 54% of all pile caps completed; 28% of piers completed; 20% of Bridge Abutment completed and 5% of Bridge Deck under construction.

Dome Kwabenya
At Dome Kwabenya, President Akufo-Addo inspected work currently ongoing on the 5.5 kilometre Kwabenya Roundabout to Taifa road. The road is expected to be completed by June 2020.

He later inspected road construction works in the Dome-Kwabenya Constituency and then to Frafraha in the Adenta Constituency to commission a newly constructed court complex and an affordable housing project by the State Housing Company (SHC) also at Frafraha and later an AstroTurf at Madina to cap it. 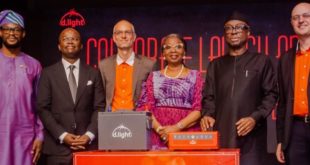