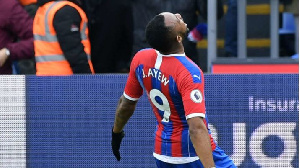 According to the CIES, the Crystal Palace forward outperformed the two football icons last month based on their set criteria which include shooting, change creation, distribution, rigour, recovery and take on.

Jordan was the highest-rated African and one of two Premier League players to make the top 10.

Seventh-placed Jordan Ayew with a rating 94.0 rated above Messi and Ronaldo whose performances for Barcelona and Juventus respectively was not enough to earn them spots in the top 10.

Jordan Ayew who joined Palace for a paltry fee of 2million pounds has been a revelation for the Eagles, scoring eight goals this season.

His eight goal, which came against Watford also equalled Tony Yeboah’s longstanding record of 24 goals in the Premiership.

List of top ten players for the month of February/March