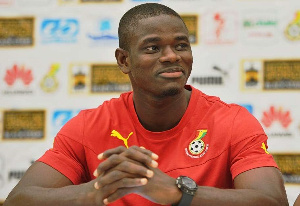 Columbus Crew captain Jonathan Mensah has revealed he is not considering retirement from international duty with Ghana despite a two-year spell into the wilderness.

The 30-year-old defender has not been called up to the Black Stars since playing at the 2019 Africa Cup of Nations in Egypt, where the West Africans suffered a disappointing Round of 16 exit.

He has so far made over 60 appearances for Ghana since debuting in 2009.

“I don’t even have the ink in my pen to write and announce a retirement.

“Even if I’m done with club football and needed by Ghana at 40, I will avail myself.

“Even the likes of Roger Milla and Flavio Amado were grown and unattached yet they still played for their national teams.”

Mensah, who won the 2009 Africa U20 Cup of Nations and Fifa U20 World Cup at youth level, made his senior Ghana debut against Uganda in 2009.

“If I’m playing great week-in-week-out, I do not need to worry about anything going on,” Mensah earlier told 3 Sports on his two-year snub.

“I just focus on my team [club] because if you don’t get a call-up, you are still with your team.

“I don’t get disappointed or discouraged, I just keep working hard and hopefully when the time comes, I will be ready to play the national team.”

When Mensah last played for Ghana, James Kwasi Appiah was in charge of the team as head coach. The latter has since been replaced by CK Akonnor since January last year.

“He is doing well. Although it’s a new job for him, he is trying his best and I will continue to support him,” the defender said on Akonnor.

Mesnah will be hoping to earn a recall when Ghana take on South Africa and Sao Tome and Principe in the 2022 Afcon qualifiers in March.