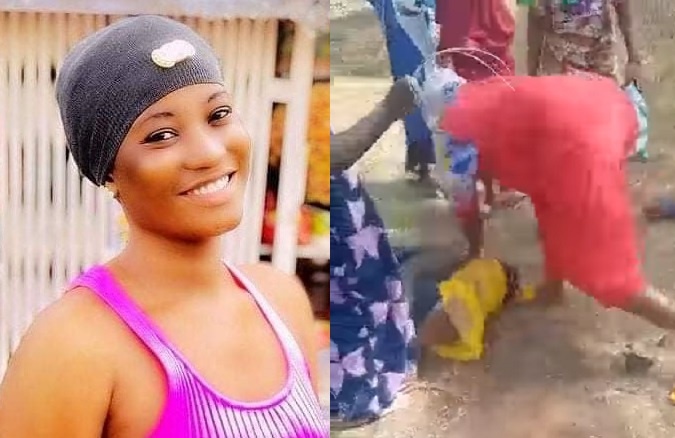 ‘Jealous’ Lady arrested for flogging colleague who slept with her boyfriend

One person has been arrested by police in Bimbilla in Nanumba North District of the Northern Region after a group of ladies were captured in a viral video brutalizing another for sleeping with the fiancé of one of them.

The ladies numbering about 5 were reported to have lured the victim into the bush and used various offensive weapons including cudgels to beat her to pulp as she begged for forgiveness indicating that there was nothing between her and the guy in question.

But the ladies on the orders of the main architect who felt jealous the victim took what rightfully belongs to her, will not listen to any pleas as she ordered her colleagues to continue abusing her in order to serve as a deterrent to other ladies while capturing the act with the mobile phones.

MyNewsGh.com has however confirmed that police managed to apprehend one Munira said to be the mastermind while there is a hunt for two Gaja Boys believed to have played various roles.

According to the facts of the case, the victim only identified as Zulaiha and a native of Bimbilla was picked up one Naa Fataw at an event and driven to the house of a colleague.

Munira, however, came to meet them in the house and alleged they were having sex and as a result called her friends who are members of a group calling themselves TMT Queens to the scene.

They took the victim to the bush and subjected her to all forms of inhumane treatment after which she was left with several bruises all over her body.

Meanwhile, police indicate that investigations into the incident have since commenced and anyone found culpable will be dealt with within the precincts of the